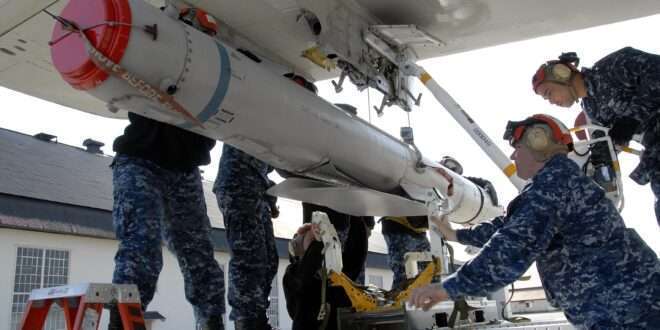 In May 2020, Boeing has been awarded two contracts worth more than $2 billion for the delivery of more than 1,000 air-to-surface and anti-ship missiles to Saudi Arabia. A first contract, worth $1.97 billion, is for the modernisation of SLAM ER cruise missiles as well as delivery of 650 new missiles “in support of the government of Saudi Arabia. The contract is to be completed by December 2028 for the SLAM ERs, a GPS-guided air-to-surface missile with a range of up to 155 nautical miles (approximately 290 kilometres).

The AGM-84H/K SLAM-ER is an advanced stand off precision-guided, air-launched cruise missile produced by Boeing Defense, Space & Security for the United States Armed Forces and their allies. Developed from the AGM-84E SLAM (Standoff Land Attack Missile), the SLAM-ER is capable of attacking land and sea targets medium to long range (155 nautical miles/270 km maximum). The SLAM-ER relies on the Global Positioning System (GPS) and infrared imaging for its navigation and control, and it can strike both moving and stationary targets.

The SLAM-ER can be remotely controlled while in flight, and it can be redirected to another target after launch if the original target has already been destroyed, or is no longer considered to be dangerous (command guidance). The SLAM-ER is a very accurate weapon; as of 2009 it had the best circular error probable (CEP) of any missile used by the U.S. Navy. It can be launched and controlled by a variety of aircraft including the F/A-18 Hornet, F/A-18 Super Hornet, and P-3C Orion, as well as by the F-15E Strike Eagle.