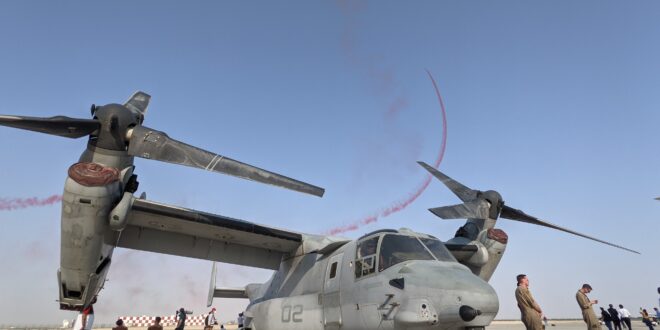 Steven Mathias, Vice President of Global Military Sales and Strategy at Bell Flight, discusses the industry’s difficulties and the company’s upcoming goals in this interview, which is a first in the Middle East region.

Bell is not new to the Middle East, what is the strategy to increase the company’s presence in the Gulf and penetrate new markets?

Bell is actively processing requests from multiple countries for combinations of the UH-1Y Venom, AH-1Z Viper, and V-22 Osprey through the Foreign Military Sales process. Bell has been present in the Middle East for almost 50 years working with different customers in a variety of industries from defense to healthcare. Our plans involve growing our presence through new aircrafts, while also tapping into the region’s military and
commercial sectors.

How does Bell adjust its helicopters to the demand, climate and environment of Middle Eastern countries?

Bell continuously evaluates production capacity and aircraft demand across its entire line and facilities and can continue to market and sell the H-1 and V-22 via Foreign Military Sales (FMS). Bell works closely with the US Government office of FMS to meet the criteria set by each country, including timelines.

The Gulf Region has a tremendous impact on the aviation market. The V-22 is deployed now around the world – shipboard and in forward deployed locations. It is performing missions not possible for other aircraft and saving lives where others could not. The H-1 will soon be operating with the Royal Bahraini Air Force.

After Bahrain, what are the Middle Eastern countries that are interested in Bell Helicopters?

Bell is actively processing requests from multiple countries for combinations of the UH-1Y utility and AH-1Z attack helicopters and works closely with Naval Air Systems Command (NAVAIR) to provide potential international partners with information about acquiring the H-1 through the Foreign Military Sales (FMS) process. International H-1 operations have mutual security cooperation benefits, including increased interoperability between forces and reduced life-cycle costs for all owners.

How does Bell cope with the region’s latest innovations?

Bell continuously upgrades the platform to make sure that it stays reliable, survivable and lethal on the modern battlefield. One of the key advantages of the AH-1Z is its ability to be a leader in capabilities today and its ability to integrate into future military operations as part of the 5th generation force.

A fifth-generation force is fully networked and can take advantage of all accessible and integrated information in a shared battlespace. This is significant because history has shown the presence of dedicated attack helicopters to support ground forces has been a key enabler to successful operations.  The 5th generation force will be no different in that the mission of the AH-1Z will remain the same but the information sharing will be significantly enhanced. The AH-1Z will be able to receive digital information or verbally from the ground commander – the result will be the same as the AH-1Z engages the enemy at the maximum range of its weapons and away from friendly forces.

Is there any cooperation presently with well-known with any Arab company?

As you can appreciate, anonymity and privacy are paramount to our customers and so we are not able to answer this question as FMS policy.

Can you tell us about Bell’s participation in the Dubai Air Show 2021? What are the objectives and expected results?

It has been a great show and Bell has been sharing information on both our commercial and military platforms and how they create a broad range of solutions for aviation needs. The Bell 505 and Bell 429 are on static display and offer guests an up-close experience with each aircraft. The U.S. Marines are demonstrating the MV-22 Osprey, the world’s only military production tilt-rotor aircraft, including aerial demonstrations on Monday and Tuesday followed by static display.

There has been a great turnout and we’re very happy the organisers of Dubai Airshow have taken careful measures to ensure everyone’s safety with social distancing and all current protocols. We definitely have the feeling that everyone is ready to get back to business and Bell is proud to have maintained its support of DAS and all the efforts in Dubai and the United Arab Emirates.