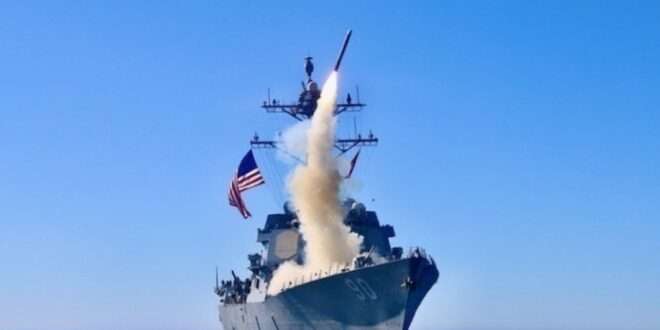 A new era for the Tomahawk missile

The Tomahawk cruise missile has been the U.S. go-to precision weapon for long-distance strikes.

It launches from ships and submarines. It can fly into heavily defended airspace 1,000 miles away. It hits high-value targets with minimal collateral damage.

And it just keeps getting better.

The U.S. Navy is recertifying and modernizing the Tomahawk missile, extending its service life by 15 years and resulting in a new series known as Block V. Raytheon Missiles & Defense will begin producing the new Block V missiles later in 2021, and has delivered the first upgraded Block IV systems to the Navy.

“This first delivery marks the culmination of years of teamwork between the Navy and Raytheon, and it’s the start of a tremendous new era for the program,” said Kim Ernzen, vice president of Naval Power at Raytheon Missiles & Defense, a Raytheon Technologies business. “These upgrades will extend the advantages Tomahawk provides the fleet for years to come.”

The mature, highly advanced Block IV variant is upgraded with improved navigation and communications systems. A multimode seeker is in development that will allow Tomahawk to engage moving targets at sea.

“Range and precision are important to counter moving targets at sea,” Ernzen said. “These enhancements take an already effective weapon and raise it to a new level.”

The Navy completed Block V flight tests in December 2020. All Block IV missiles will be recertified, modernized and delivered as Block V missiles.

“Modernization ensures Tomahawk’s relevance now and in the future,” Ernzen said. “This latest delivery marks the next big step for the Tomahawk program.”