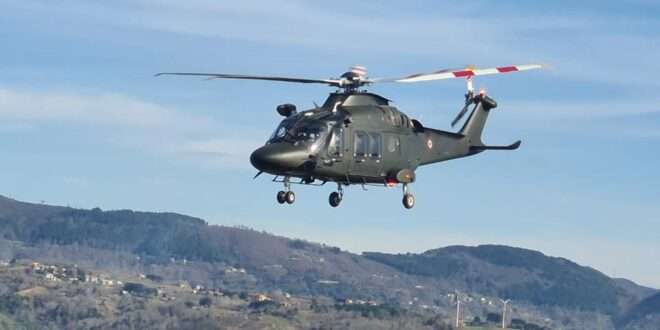 Airpower 2022, one of the most eagerly awaited airshows on the European scene, opens its doors again from 2 to 3 September in Zeltweg, Austria: a great show for military and civil aeronautics from some 20 countries as well as an unmissable opportunity for industries to present their products. Leonardo will present its most innovative proposals in the aeronautical and helicopter fields. Also highlighted during the exhibitions will be the AW-169, of which the Austrian army recently purchased 18 examples.

The Airpower ‘22 airshow in Zeltweg is a real stage for Leonardo’s helicopters and aircraft, with a special focus on the most advanced and effective fixed-wing and rotary-wing solutions to meet Austria’s current requirements. On the rotary wing domain, two Italian Army’s AW169M helicopters (designated UH-169B) designed and produced by Leonardo will be showcased on static display and in flight.

In January 2022, Leonardo and the Directorate for Air Armaments and Airworthiness of the Italian Secretariat General of Defence/National Armaments Directorate signed the Acquisition Contract for the supply of AW169M Light Utility Helicopters (LUH) to the Austrian Ministry of Defence. The contract was signed in the framework of the Italy-Austria Government-to-Government (G2G) Agreement. This bilateral collaboration between the two countries aims at establishing a strategic partnership in the rotorcraft sector, with Austria looking at Italy and the AW169M LUH programme for the replacement of its Alouette III aircraft, in service since the 1960s. The programme envisages the delivery of 18 helicopters, the first one within 2022 – plus a comprehensive and customized support and training package – that will be able to carry out a wide range of missions supporting Austrian defence requirements and the national community, such as troop transport, combat operations, disaster relief and emergency response, fire-fighting, mountain rescue and MEDEVAC. Austrian crews will leverage on the initial training delivered thanks to the support of Italian Army’s and its expertise as an AW169M LUH operator and will also benefit from the supply of dedicated training and simulation devices.

With over 300 AW169s on order in the global market for the widest scope of missions, around 150 already delivered and more than 120,000 flight hours logged, the type is the only latest generation helicopter in its category introduced into the market in nearly 40 years. The AW169 features advanced avionics and glass cockpit, the most spacious cabin in its class, high versatility and the best power-to-weight ratio thanks to outstanding overall performance. Several other military or law enforcement/firefighting operators have chosen the AW169 in Italy (Army, Guardia di Finanza, Carabinieri) and abroad (Norway, Slovenia, Japan, Republic of Korea, Argentina, Indonesia, Brazil).

In the fixed-wing aircraft domain, AIRPOWER22 will also see the presence, in static and within the flight display, of two Italian Air Force’s M-346 Master Advanced Jet Trainer (AJT) aircraft (designated T-346A by the ITAF). The Leonardo M-346 is the ideal candidate for the replacement of the Austrian Air Force’s Saab 105 fleet, which has recently been phased out. The aircraft is a suitable solution to both satisfy the Austrian Air Force’s jet pilots training requirement and perform air-policing tasks.

The M-346 Master is a twin engine, tandem seat, next generation advanced/lead-in-fighter (LIFT) jet trainer and light combat aircraft. The aircraft, in its basic “Advanced Jet Trainer (AJT)” configuration, was purpose built for a wide range of training capabilities, long term reliability and utmost cost-effective operations. The aircraft is the central element of an Integrated Training System comprised of simulators and ground based instructional devices, including an operational “Live, Virtual, and Constructive (LVC)” environment, designed to allow student pilots to develop knowledge, skills and practices needed for effective exploitation of modern combat aircraft.

More than 100 M-346 have been contracted to major Air Forces worldwide from Italy, Israel, Poland, to Singapore, Qatar and Greece. The Italian Air Force T-346A showcased in Zeltweg trains 4th+ and 5th generation fighter pilots coming from Italy as well as partner countries including the Austrian Air Force. It is also the backbone of the Italian Air Force-Leonardo “International Flight Training School (IFTS)” based in Italy, where pilots from many different countries such Japan, Germany, Qatar and Singapore are already successfully training today.

The aircraft is also available in the “Fighter Attack (FA)” configuration. Retaining a full advanced/lead-in fighter trainer capability, the FA variant has significantly enhanced combat capability thanks to a Leonardo “Grifo 346” multi-mode radar, IFF (identification friend or foe), tactical data link, self defence systems and seven hard points for the carriage of a variety of Air-to-Air and Air-to-Ground weapons and targeting /reconnaissance pods.