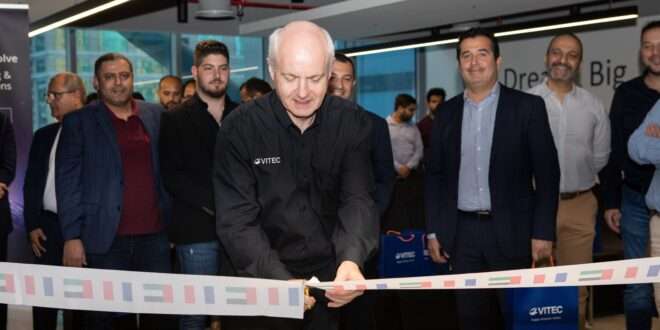 VITEC, a global leader in end-to-end video streaming solutions inaugurates a new office in Dubai in-line with its rapid expansion in the Middle East. The company’s investment into its new regional headquarters demonstrates VITEC’s commitment to long-term growth in the Middle East with a particular focus on Saudi Arabia, UAE, Qatar, and Egypt.

Since the technology leader established its presence in the region in 2019, business in the area has accelerated. VITEC is expecting an impressive 50% growth in revenue for year 2022. With a highly skilled regional team of nine in Dubai and four in Saudi Arabia, the ME team covers sales, business development, presales, and post sales to better serve existing customers and prospects.

Nicolas Pons, VP Business Development Middle East at VITEC, commented, “The purchase of our new office is very much aligned with VITEC’s philosophy, where strategic decisions are made regionally to future-proof our company and enable growth. We believe this investment will strengthen our presence, and expand our reach into new business opportunities, markets, and verticals in the region.

As a French private company, VITEC controls its own technologies and the supply of its components. Dedicated teams are working to optimise its products in two areas: technically, to deliver the best in terms of IPTV distribution and video streaming; and environmentally to contribute to a greener future. Sustainability is a key part of VITEC’s core values, aligning with the Middle East’s net zero vision. The organisation has been carbon neutral since 2021 and recently launched the GreenPEG initiative to further optimise MPEG technology by addressing – and minimising – the size, weight, and power of devices to reduce energy consumption.

VITEC’s establishment of the new regional headquarters follows its acquisition of Exterity, signalling the company’s intent to solidify their place as the leader of video streaming, IPTV, and digital signage solutions. VITEC utilised its large engineering team of over 200 to accelerate the development of new features for Exterity’s solutions, which are now fully integrated into the VITEC portfolio.

Over the next year, VITEC intends to continue with its strategic growth plan in the Middle East, targeting key verticals including broadcast, military, healthcare, sports/venues, corporate/government and accommodation. “We believe our continuous investment in the region will strengthen our ties and support our anticipated further expansions in the Middle East,” concluded Pons. “Our products and philosophy align perfectly with the region’s requirements and ambitions, and we’re looking forward to supporting companies across the Middle East for many years to come.”