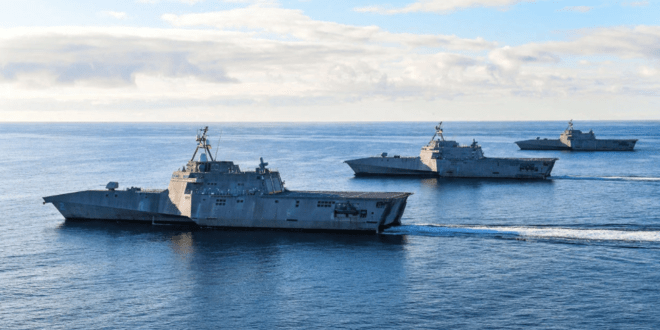 General Dynamics Mission Systems announced today that it was awarded two contracts by the U.S. Navy worth $30.5 million in support of various maintenance and upgrade initiatives for the Navy’s Independence-variant Littoral Combat Ship (LCS) fleet.

As part of a $17.4 million contract announced by the Department of Defense (DOD) on May 4, General Dynamics Mission Systems will develop and upgrade the Independence-variant LCS fleet’s hull mechanical & electrical system, which includes software upgrades and maintenance of the engineering control system. Work for this contract will be performed in Pittsfield, Massachusetts, Mobile, Alabama, San Diego, Philadelphia and Singapore, and is expected to be completed by May 2026.

As part of a $13.1 million contract announced by DOD on May 24, General Dynamics Mission Systems will provide the Independence-variant LCS’ in-service engineering and life cycle support for Command, Control, Communications, Computers, Cyber and Intelligence and training systems to include: critical engineering; design; integration; test and evaluation; software development and testing; logistics product development and distribution; and configuration management. This contract includes options, which, if exercised, would bring the cumulative value of this contract to $79,222,498. Work will be performed in Pittsfield, Massachusetts, Mobile, Alabama, San Diego and Singapore, and is expected to be completed by May 2026.

“General Dynamics Mission Systems is excited to continue this sustainment and modernization work for U.S. Navy,” said Stan Kordana, vice president of surface systems at General Dynamics Mission Systems. “Our engineers have a long history of collaborating with our industry and Navy partners to sustain the performance of LCS engineering control and core mission systems; ensuring they are ready and able to support the Navy’s mission requirements at home and abroad. Our sustainment team recognizes the critical role the Independence-variant Littoral Combatant Ship plays on the national stage, especially with three ships planned for deployment to the Western Pacific this year. Our ‘Any Program, Any Mission System on Any Platform’ approach ensures LCS will be able to successfully achieve their missions, today and in the future.”