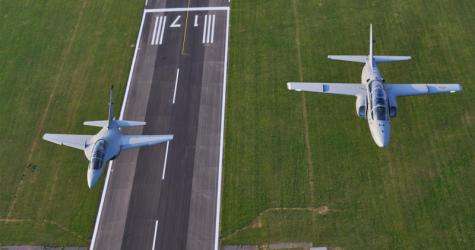 Leonardo is touting the fact that, with its M-345 (R) and M-346 (L) jet trainers, it is now the only company in the world to offer a complete training system for military pilots, from the basic phase to the pre-operational stage, with proprietary products. (Leonardo photo)

With its M-345 and M-346 jet trainers, Leonardo is now the only company in the world to offer a complete training system for military pilots, from the basic phase to the pre-operational stage, with proprietary products for platforms and ground-based training system which is a set of training aids including multimedia lessons, flight and mission simulators of growing complexity, a mission planner and debriefer, and a training management system.

Furthermore, the features of the M-346 allow the Division to offer solutions using systems that are already fully operational to meet the increasingly complex demand for “aggressor” capability, that is training for front-line fighter pilots, along with companion training, meaning flights intended to maintain fighter pilots’ operational readiness, all at a fraction of the cost using front-line aircraft.

Enrico Scarabotto, Head of Flight Test Operations, and Emanuele Merlo, Head of LoB Trainers in the Aircraft Division, discussed the topic during the event.

During the primary and basic phases of a military pilot’s training, in which pilots first learn to fly and then refine their basic skills, we need to take advantage of the ability to interact with the technologies typically used by ‘Millennials’. This means achieving more learning through multimedia and simulation tools including virtual and augmented reality visual system, haptic interfaces, and using more challenging training aircraft than the existing primary and basic training platforms.

“Our Integrated Training System (ITS) based on the M-345, single engine, jet training aircraft,” continued Merlo, “can improve results in the initial screening phase, cut the amount of time required to understand the pilot’s aptitudes for subsequent assignment to different types of aircraft, and use the aircraft itself for a variety of purposes, including advanced training and aerobatic flight.”

The ITS based on the twin engine M-346 advanced jet trainer is the solution already available, with the most advanced capabilities for both performance and the ETTS/LVC system, capable of evolving in the future to ‘produce’ highly qualified pilots for a new generation of aircraft.

Technologies such as artificial intelligence and mixed and augmented reality, with the availability of data links for transferring and processing large quantities of data in real time, will further add to this capacity, which will increasingly be included in the training syllabuses not only in phases 3 (advanced) and 4 (pre-operational) but in subsequent phases as well.

Another important aspect of the evolution of training capabilities is that pilots of front-line aircraft cannot maintain adequate skill levels flying training missions only “against” aircraft of the same type or aircraft of older generation today managed by specialized Aggressor/Red Air private companies, which simulate adversaries poorly performing and easily visible on the radar screen.

“It’s time for a change,” said Scarabotto. “We need to train in net-centric operational scenarios, with high-performing, ‘low-observable’ adversaries. In the role of simulated adversary (Aggressor/Red Air), we must use advanced training aircraft with high level of operational capabilities, including ETTS and LVC systems, while simultaneously expanding our existing ETTS/LVC network to include front-line fighter planes, reproducing the advanced operational scenarios we need, while keeping costs down.”

The M-346FA is now the best solution for a new generation aggressor aircraft capable of producing virtual scenarios, sharing them via datalink and stimulating the real sensors of aircraft during training, thanks to the presence of a true on-board radar system and a sophisticated self-protection system.

“If ETTS/LVC technology is introduced into our operational squadrons, with advanced training aircraft simulating threats, we will be able to reproduce complex scenarios like those of the famous Red Flag exercises using only a few front-line aircraft, significantly improving pilots’ skills and proficiency at a much lower cost and with the same if not greater operational effectiveness,” continued Scarabotto.

Another benefit of using advanced training aircraft is to act as ‘Companion Trainer’. Scarabotto explained that “to maintain sufficient readiness pilots in the operational squadron could fly with the Companion Trainer for up to half of all their annual flying time, instead of the front-line fighter plane, which costs up to 10 times as much per hour in flight. However, the Companion Trainer must be capable of simulating the performance, cockpit configuration, sensors and weapons of the front-line aircraft, including complex scenarios.

As well as this enormous cost-saving, we would maintain operational capabilities with the aid of a high-performance aircraft capable of using virtual reality as its principal form of training.” Also for this role, the M-346FA looks as the perfect solution: fast, agile, equipped with the required sensors and low cost.

“In the near future,” concluded Merlo, “the evolution of networking technologies and AI will permit the creation of a global ‘joint’ ITS based on the evolution of Leonardo’s existing operational ITS and capable of combining operations in the air, on land and at sea, including real and virtual participants in a single net-centric operational environment.”