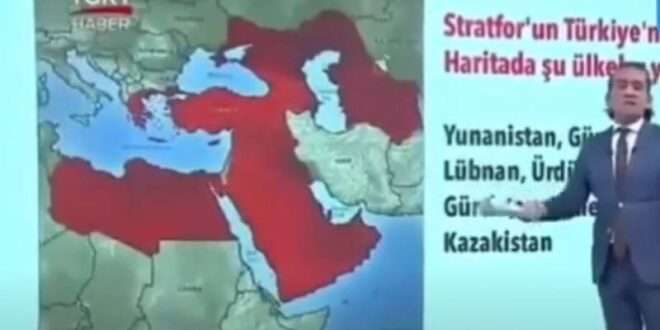 Expectations vs Reality: Stratfor’s Map of Turkey’s Sphere of Influence 2050 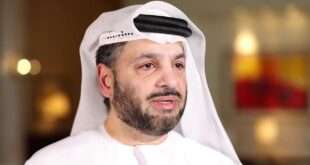 EDGE: A New Landscape for the Defence Industry in the Middle East 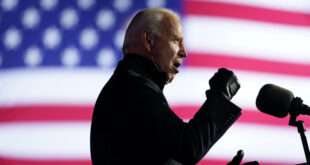 The dangerous U.S. policy of weakening Saudi and Emirati militaries while empowering Iran and its militia

On February 12th, the Turkish national TV station, TRT1, broadcast a mostly-red map projecting Turkey’s expanding geopolitical influence, by 2050, over southern Europe, the Middle East and North Africa, Caucasia, and parts of Russia. This map was originally created, in 2009, by George Freidman, the founder of Stratfor, an American corporate intelligence group. Apparently, showing this old map on national TV was meant to serve the ongoing pro-Erdogan propaganda, especially among the many Turkish citizens who embrace the ideology of neo-Ottomanism. However, the shocking speculations attached to the map, coupled with Turkish military’s recent moves in the aforementioned regions, made the map travel beyond Turkey’s borders, raising endless controversy among observers, worldwide, on how realistic Stratfor’s forecast could be.

Freidman predicted that by 2050, Turkey will expand its power way beyond its current borders to build a new empire, similar to the falling Ottoman Empire. However, it will be an empire of influence not actual occupation. Countries falling under this claimed influence include, but are not limited to: Egypt, Libya, Saudi Arabia, United Arab Emirates (UAE), Yemen, Iraq, Syria, Greece, Cyprus, and Azerbaijan. Ironically, Freidman’s map kept Israel, which exists right in the heart of the affected regions, immune to the claimed expansion of the Turkish influence. That is despite Erdogan’s declared ideological animosity to Israel and his repetitive vows to “liberate Jerusalem from the hands of the Jews.”

According to Stratfor’s forecast, the proposed expansion of Turkish influence, over the aforementioned regions, should rely on two parallel factors. The first factor is Turkey’s success in employing its economic supremacy, military strength, and cultural/religious soft power to exert influence over the states and/or the societies of targeted countries. The second factor is the natural weakening, over time, of targeted states, which were expected to go through political turmoil that should eventually lead to political divisions or, in severe cases, civil wars.

Speaking of Turkey’s cultural/religious soft power, Erdogan has been cunningly using Turkey’s model, as the only country that successfully consolidated Islam and democracy under a secular state, to gain support and empathy, among the youth and grassroots citizens of the huge Muslim population, stretching from Morocco to Malaysia. That was particularly true after the eruption of Arab Spring revolutions, in 2010-2011. For example, one of the reasons why the Egyptians elected a Muslim Brotherhood regime, in 2012, was that they were misled by the propaganda that the Egyptian Muslim Brotherhood’s Freedom and Justice Party was an extension to Erdogan’s Justice and Development Party (AKP). By 2013, political Islamist groups, loyal to Erdogan’s Islamist AKP, were already leading the governments of most Muslim countries. However, in less than two years, Erdogan’s dream of leading an expanding Islamic Caliphate faded away, as the Muslim Brotherhood regime in Egypt was removed in mid-2013, followed by the resignation of Muslim Brotherhood’s Al-Nahda Party in Tunisia, and the declaration of war by Arab Gulf countries, Saudi Arabia and UAE, on political Islamist groups in the region. Meanwhile, Turkey’s state model lost its glamor in the eyes of the people of the Middle East, not only because of Erdogan’s unconditional support to political Islamists, but also because of his messing with the Turkish constitution to seize all political powers in his hands.

On the economic supremacy issue, Friedman expected that by 2020, Turkey would have been among world’s top ten countries with the strongest economy. Here we are in 2021 and that is not the case. Based on the most recent available data by the World Bank, Turkey is ranked the 19th largest economy in the world, with a GDP of 761.43 billion dollars, in 2019. Last summer, the Turkish Lira fell to its lowest exchange rate against the US dollar, before slowly recovering at the beginning of 2021. Meanwhile, the economic growth of other countries, which falls under the claimed Turkish influence, in Stratfor’s forecast map, is doing much better than Turkey. For example, the same World Bank ranking put the Russian Federation at the rank 11, and Saudi Arabia at the rank 18, of world’slargest economies, in 2019.

In addition, Turkey is, purposefully, excluded from all recently-formed regional economic coalitions, such as the EastMed Gas Organization and the Philia Forum, which brought together eastern Mediterranean countries, such as Greece, Cyprus, and Egypt, with the most powerful countries in the Arab Gulf, Saudi Arabia and UAE. Ironically, all of them fall under the claimed Turkish influence, described in Stratfor’s map. Turkey’s economic alliance with Qatar cannot balance the economic power of these regional coalitions, forming and performing under the nose of Turkey. Recent academic publications argued that Turkey’s recent successful military intervention on the side of Azerbaijan, in the war over Nagorno-Karabakh region, enhanced Turkey’s opportunities to project economic influence in Central Asia. However, this instigates a brutal competition with Russia and China, which Turkey’s economy is not ready to handle at the moment.

Nevertheless, Turkey’s military strength is already growing faster than expected. Turkey is ranked by Global Firepower Index as the country with the strongest military in the Middle East. The Turkish military is the second largest military in NATO, after the United States. Currently, the Turkish military operates bases, spread all over the world; in the Middle East, Africa, Caucasus, and Asia. Despite all Turkey’s internal political troubles and economic failures, the NATO-trained, Hulusi Akar, who serves as Turkey’s Minister of Defense, since 2018, has been relentlessly harvesting one success after the other, using both his military and diplomatic skills.

In perfect application to Freidman’s predicted scenario, in the aftermath of Arab Spring revolutions, Turkey has been cleverly using every opportunity to militarily intervene into the Arab countries, exhausted by political turmoil or torn by civil wars, under the flag of re-instating stability in the region or fighting terrorism. This was the case in Syria, Iraq, Libya, and Sudan. In other regions, Turkey purposefully re-awakened muted conflicts to make a space for itself to intervene, as was the case in eastern Mediterranean and the war over Nagorno-Karabakh region, last summer. Right now, Turkey has tens of thousands of military personnel and military bases in northern Syria, northern Iraq, western Libya, Azerbaijan, Sudan, Qatar, and Northern Cyprus, which has been occupied by Turkey, since 1970s.

Still, Turkey is unable to control, neither by soft power nor military power, the one country that Freidman highlighted as the gate, through which Turkey can manifest his expectations into reality, by 2050. This country is Egypt. In his speculations, Friedman drew a scenario wherein Egypt should go through political instability, which opens the door for Turkey to deploy its military troops to Egypt, under the guise of bringing stability, and voila Turkey imposes its control over the Suez Canal, and the Red Sea. As a result, Israel will find itself obliged to submit to and cooperate with Turkey, which has become its immediate neighbor. Then, through the Red Sea, Turkey will expand its power into the Arabian Peninsula and Arab Gulf, up to the borders of Iran. As Turkey gets wealthier after seizing the oil wealth of the Arab Gulf countries, Freidman claimed that “by the middle of the century, Turkey’s influence will extend deep into Russia and the Balkans, where it will collide with Poland and the rest of the Eastern European coalition. It will also become a major Mediterranean power, controlling the Suez Canal and projecting its strength into the Persian Gulf. Turkey will frighten the Poles, the Indians, the Israelis, and above all the United States.”

Turkey had already got a golden opportunity, in 2011-2013, to manifest Freidman’s speculations into reality, by abusing Egypt’s weak state, in the aftermath of the Arab Spring. However, three things made it impossible for Turkey to benefit from this opportunity. They are:

Meanwhile, the Arab Gulf countries, Saudi Arabia and UAE, which fall under the claimed area of Turkey’s influence, in Stratfor’s map, their military powers to unprecedented levels. UAE, for example, has been described by renowned military analysts as “Little Sparta” for the highly advanced technology imported to its military, in the past decade. UAE is currently fighting against Turkey in Libya, Syria, and in the Mediterranean on the side of Cyprus and Greece.

Given all the aforementioned facts, it has become almost impossible for Turkey to intervene in Egypt or the Arab Peninsula, on its way to exerting influence on Europe and Asia, as Freidman speculated in his forecast from 2009. Many changes, mostly hard to foresee, took place since the release of those predictions. The countries, which Stratfor’s map highlighted in red as areas of Turkey’s influence in 2050, are currently, in 2021, acting as tough political, economic, and military competitors to Turkey. Thus, the only way available for Turkey to be influential in its region, should happen through good faith diplomacy and cooperation, not through illegal military interventions hunting on states’ weaknesses.

Dalia Ziada This year marks the tenth anniversary of the Arab Spring. A whole decade …