The U.S. Navy has selected the Naval Strike Missile, offered by Raytheon Company (NYSE: RTN) and Kongsberg Gruppen, to meet its over-the-horizon requirement for littoral combat ships and future frigates. 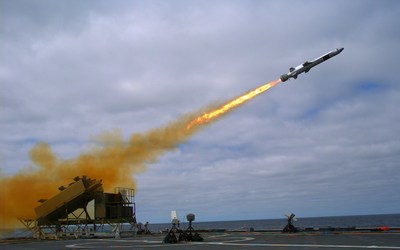 Raytheon will manufacture and deliver over-the-horizon weapon systems under a $14.8 million contract for offensive missiles loaded into launching mechanisms, and a single fire control suite. The contract includes options which, if exercised, would bring the cumulative value to $847.6 million.

NSM is a long-range precision missile that strikes heavily defended land and sea targets. The missile, which can defeat enemy defenses up to 100 nautical miles away, uses advanced seeker and target identification technology.

“Raytheon and Kongsberg are providing the Navy with a proven, off-the-shelf solution that exceeds requirements for the over-the-horizon mission,” said Dr. Taylor W. Lawrence, president of Raytheon Missile Systems. “Because it is operational now, NSM saves the United States billions of dollars in development costs and creates new high-tech jobs in this country.”

Raytheon will manufacture NSM launchers, missiles and components in the U.S. The company has begun launcher production at its factory in Louisville, Kentucky, and will perform missile final assembly and test at its Tucson, Arizona, facility. The contract will generate business for more than two dozen U.S. suppliers. The missile program is the latest product of a longtime partnership with trusted ally Norway and its defense leader Kongsberg.

“Raytheon and Kongsberg are celebrating 50 years of cooperation, and the selection of the NSM marks another successful step for our close relationship,” said Eirik Lie, president of Kongsberg Defence and Aerospace AS. “We are able to provide the U.S. Navy with the best of two worlds by combining the capability of NSM with Raytheon’s proficiency as the world’s largest missile maker.”