Defence and security company Saab has received an ammunition order from the US Department of Defense (DoD) for the Carl-Gustaf man-portable weapon system, known in the US as M3 MAAWS (Multi-role, Anti-armor Anti-personnel Weapon System). The order value is USD 5.4 million (MSEK 46).

The order comes under the terms of Saab’s framework contract announced with DoD in August 2014 for the 84-mm recoilless rifle system.

“The Carl-Gustaf, with its broad range of munitions types, has repeatedly proven itself in the most demanding environments and it is a versatile, powerful tool for the soldier. This order demonstrates the strong belief by the customer in the system”, says Michael Andersson, President and CEO, Saab Area North America.

The Carl-Gustaf is a world-leading weapon system within the support weapon category. It has been regularly modernised and enhanced to meet users’ changing needs. The latest version, the Carl-Gustaf M4 (called M3E1 in the U.S.), reduces the weight from 10 kg to less than 7 kg. Carl-Gustaf is a battle-winning system for soldiers operating in demanding environments. Employing a wide range of ammunition types, the Carl-Gustaf system allows dismounted soldiers to defeat multiple challenges – from neutralising armoured vehicles to clearing obstacles and engaging enemies in buildings. 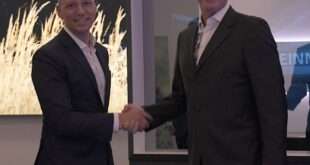