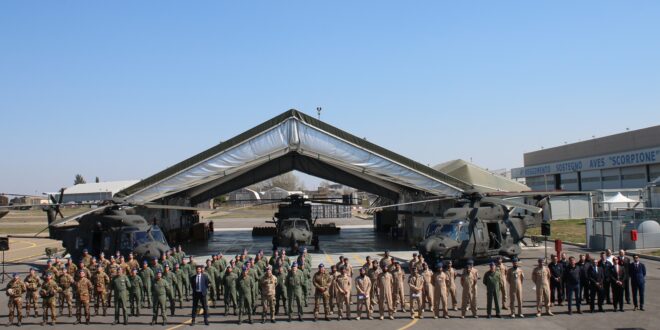 The strategic cooperation between Italian Army Aviation, Qatari Emiri Air Force (QEAF) and Leonardo Company allowed to achieve 2000 flight hours in training Qatari crews on board of NH-90 helicopter. Professional training for Qatari personnel is one of the most important activities carried out by the Army Aviation and this underlines its steady role by now of flight international school for military helicopters.

AVES Commander, Major General Andrea Di Stasio, who attended the pilots graduation ceremony, just pointed out that “the experiences with Qatar today, together with former others in favour of various allied and friend Countries, in addition to the next commitment with Austria about LUH (Light Utliity Helicopter), show the international significance of the Italian Army Aviation about the training in military flight, as keystone to build international partnership and cooperation in the military field.

Also Fabrizio Peano, Head of Training Academy at Leonardo Helicopters, attended the event. During his speech he said “We’re happy to provide our contribution to the success of this important programme for Qatar, not only supplying the helicopters but also delivering the relevant training services and leveraging strong synergies with the Italian Army. By doing so, together with the national Armed Forces, we’re able to transfer from Italy a unique operational experience to the end user”.

The overall commitment, during three years since the start of the “Qatar program”, allowed to achieve 2.000 flight hours on NH-90 helicopter, in addition to 2.500 hours on the flight simulator. The Army Aviation had the capacity to transfer the knowledge acquired in many operational experiences, thus making available to the foreign collegues a “training gym” about the aircraft military use, aimed at maximum realism.

At the end of the event, the AVES Commander, QAEF and Leonardo representatives expressed their actual and shared appreciation of the synergistic effort, looking forward to further opportunities and partnership in this specific sector.

NH-90 helicopter is on duty in the Army Aviation since 2007. During these years, the Units which use the helicopter, gained a considerable operational experience, both nationally and internationally, in the multiple mission typology that this aircraft allows to carry out.