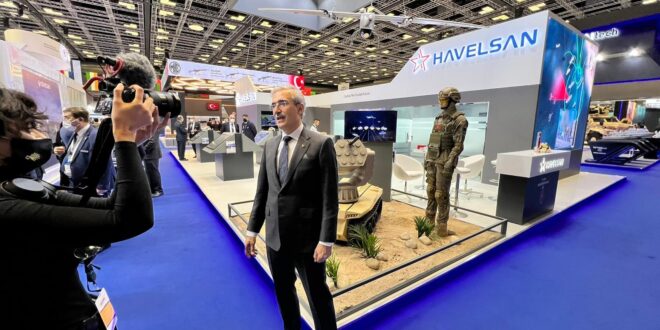 HAVELSAN had a great start in DOHA INTERNATIONAL MARITIME DEFENCE EXHIBITION & CONFERENCE (DIMDEX) which is held from 21 to 23 March 2022 in DOHA, QATAR.

HAVELSAN which offers new generation end-to-end solutions in the fields of defence, simulation autonomous platform technologies, ICT, homeland and cyber security, would be displaying its advanced products and smart solutions to its esteemed visitors during DIMDEX.

HAVELSAN designed and produced HAVELSAN BARKAN in response to the needs of the modern combat field. The BARKAN is an important assistant for field personnel in many areas, especially in increasing the success of the operation, preventing losses and reducing operation costs.

With its remote control and autonomous mission capabilities in the operation areas of the future, the BARKAN will be a close companion of the military units. Thanks to BARKAN’s swarm infrastructure, joint operations with other land and air vehicles will be possible from a single center.

BARKAN can be used in multi-purpose missions thanks to its superior autonomous features and its modular design in which different payloads can be integrated. It has been developed for tasks such as carrying or towing cargo, providing close protection, and armed reconnaissance.

With features that meet the needs of modern armies, HAVELSAN B-30 is a Sub-Cloud Autonomous UAV that can perform joint operations with all unmanned systems with its vertical landing and take-off capability, fully autonomous mission capability, modular architecture that allows the integration of different payloads and many more superior features.

The B-30 is a fixed-wing Sub-Cloud Autonomous Aircraft that can take off and land vertically. The system, which is powered by a petrol engine during horizontal cruise, is supported by electric motors in vertical takeoff and landing.

HAVELSAN shows how ambitious it is about the cutting-edge technologies for unique hardware and software it develops.