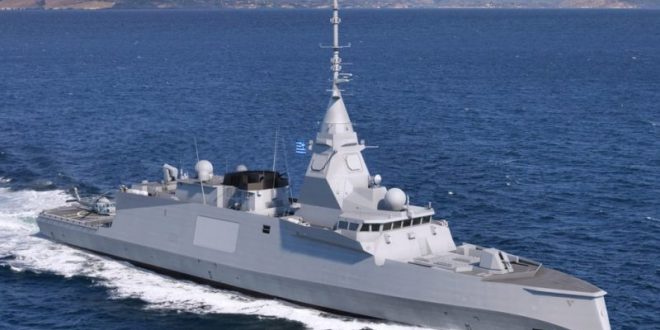 This Tuesday, September 28, in the presence of the Minister of the Armed Forces, the Greek Minister of Defence signed, with the CEOs of the French companies Naval Group and MBDA, a “Memorandum of Understanding” which provides for the acquisition by the Hellenic Navy of 3 Defence and Intervention Frigates made in France, plus a fourth optional, as well as their maintenance and associated armaments.

Following the acquisition of 18 Rafale by Greece, and the announced intention to order 6 more (for a total of 24 Rafale), this decision is part of the more general framework of a strategic partnership concluded between the two countries, announced today by the President of the French Republic and the Greek Prime Minister.

The Minister of the Armed Forces, Florence Parly said: “This is a historic announcement, which confirms the exceptional defence cooperation between our two countries. The construction by France of this cutting-edge equipment contributes to an ambitious European defence. Our two navies will be equipped together with these first-rate, modern and powerful combat ships.”

The Defence and Intervention Frigates, French frigates of the latest generation, will equip the French Navy from 2024 and the Hellenic Navy from 2025.

This choice will allow the two Navies to benefit from exceptional interoperability; it also paves the way for enhanced cooperation, offering in particular the prospect of significant synergies in the field of support.

The choice of Greece corresponds to the desire for strong European sovereignty and once again materializes the vitality of our bilateral cooperation. It shows that the French naval industry is able to propose our partners an offer of the best world standard.

This new export success is part of a proactive policy by the Minister of the Armed Forces aimed at strengthening our European partnerships. Since 2017, France has never exported so much arms to European countries: Europe has in recent years become the leading export zone for French defence equipment.

Engine of our economy and the vitality of our territories, our defence industry (“Defence Technological Industrial Base”, BITD) employs today 200,000 people in France. Between 2017 and 2020, 36,320 jobs were created in France in defence companies.