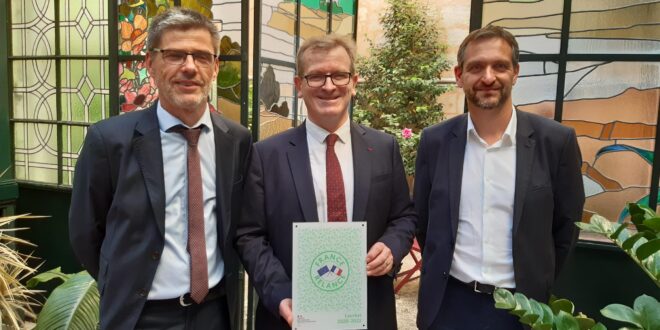 On May 11, 2022, Mrs. Fabienne BUCCIO, Prefect of the New Aquitaine region, presented Arquus with an exceptional grant on behalf of the State to support industrial investment in the territories. This announcement was made during an evening gathering the winners of the “Territoires d’Industrie” (Territories of Industry) call for projects organized at the prefectural residence in Bordeaux.

Ms. BUCCIO emphasized the strong commitment of the State to accelerate industrial projects, the promotion of trades and industrial activities in the territories. She also recalled the commitments made by France in terms of sustainable development and decarbonization for 2030, commitments that involve all economic actors in the region.

It is in recognition of this support and commitment that this grant has been awarded to Arquus. It will contribute to the construction of the new Arquus logistics platform in Limoges, the future cornerstone of the Arquus Center of Excellence for the Production of Vehicles.

As part of Arquus’ industrial development plan, investments have been made in the Limoges site to enable it to continue its development at the heart of the company’s industrial facilities. The site now relies on a logistics platform located outside the site, which complicates logistics flows. With this new platform, the Arquus site in Limoges will benefit from modern logistics, able to support the production workshop in its future challenges. Work on the logistics platform began at the end of 2021. It is expected to continue throughout 2022, with inauguration scheduled for 2023.

for the benefit of the armed forces. It is also a mark of confidence in the Limoges site, which is pursuing an essential transformation over the years to perfect its industrial capacities and to continue to grow as harmoniously as possible, and to continue to influence the entire the Limoges employment area.

With 350 employees and numerous partners and suppliers, mainly French, the Limoges site is a major economic player. In addition to vehicles production, it is responsible, within a consortium formed with partner companies Nexter and Thales, for putting together mobility kits for the Army’s Griffon and Jaguar, i.e. the preparation of all the parts and components needed to ensure the mobility of these vehicles.

Arquus is also a leading player in the energy transition of land mobility, with innovative demonstrators such as the VAB Electer in 2016 and the Scarabee in 2018, the world’s first true hybrid military vehicle. Within the GME EBMR, Arquus is currently working on the development of the Griffon hybrid, which should be operational in 2025. In parallel, the company is investing in the development of hybridization solutions for all military vehicles, from reconnaissance vehicles to battle tanks.

Arquus’ commitment to sustainable development is illustrated in Limoges by the ISO14001 certification of the site and numerous actions in favor of respect for the environment. Located on the banks of the Vienne River, the site has for many years sought to strike a harmonious balance between strengthening industrial capacities for the benefit of the armed forces and preserving an exceptional working environment.