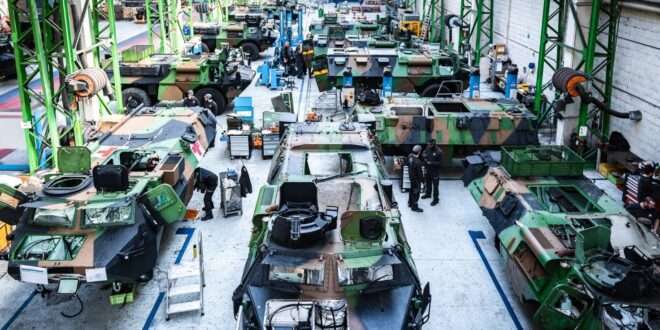 The Private Industrial Repairs (PIR) objectives are fulfilled for Arquus in 2020. The industrial targets have not only been met, but also increased on several programs during the year. The industrial apparatus has demonstrated throughout the year its resilience to the benefit of the armies, by limiting downtime due to the new health conditions, and by adapting the activity schedule to meet the expectations.

2020 is an exceptional year for Arquus’ support activities. Taking all programs together, the company has completed the renovation of 508 vehicles this year, as well as the renovation of more than 2,500 organs. These activities accounted for nearly 30% of Arquus’ total industrial load, a share that is growing year after year.

These results can be credited to the investment made by Arquus’ repair teams throughout the year on all sites and programs. They also reflect the relationship of trust between Arquus, SIMMT (the Integrated Structure in charge of the maintenance of all Army equipment) and SMITer, for the greater benefit of the uptime of the fleets.

Since 2014, the Arquus site in Limoges has been responsible for industrial repair operations on GBC180s. Resulting from a renovation program of the GBC8KT from Berliet, the GBC180 is at the heart of the Army’s logistics, with 5,000 vehicles in service in 2021. Over the years, the site has developed unique expertise in the renovation of GBC180s, acquired in close collaboration with SMITer teams. The current structure, adaptable to the needs of the institution, represents ten workstations.

The initial objective for the year 2020 was to renovate 125 vehicles. Despite the development of the health crisis and a six-week shutdown for safety reasons, the objective has been maintained in agreement with the SIMMT in order to provide the best possible support to the armed forces at the height of the crisis. The first 30 GBC180s were handed over to the armed forces in April 2020, and then deployed on operations. In addition to these 125 refurbishments, Arquus also took charge, at the request of the SIMMT, of lighter repairs on 13 other GBC180s, also carried out at the Limoges site.

By 2019, 150 vehicles had been made available, in line with commitments. With this new series, the total number of GBC180s renovated in Limoges exceeds 675 since 2015 and the first deliveries.

The Marolles-en-Hurepoix plant is also contributing to the GBC180 refurbishment operations, by taking charge of mechanical components, including the transfer cases. The initial repair target of 150 transfer cases was maintained despite the health situation, and then increased at the request of the SIMMT. Despite COVID, 160 transfer cases were renovated and returned to the forces before the end of the year.

Since 2004, Marolles has also been repairing mechanical components (engines, axles, gearboxes, transfer cases, etc.) for the French Army’s VBLs and PVPs. These activities, carried out in partnership with the SMITer branch in Marolles, ensure the complete renovation of more than 500 components per year.

Marolles has also been repairing complete PVPs since 2018, with 44 vehicles treated in 2020. The plant’s teams volunteered to work on the PVP renovation line on November 11, 2020 to speed up their availability to the forces, in a context of very sustained operational rhythms. These activities, which should continue until 2026, are currently being transferred to the Saint-Nazaire plant.

Since 2006 and the installation of the Operational Maintenance Center (Centre de Maintien en Condition Opérationnelle, CMCO) on a former military base in Garchizy, Arquus ensures, in collaboration with the SMITer antenna present at the CMCO, complete repair services of VAB (Véhicule de l’Avant Blindé) for the benefit of the forces. With 135 projects carried out over the year, the site has delivered its 1,000th renovated VAB in 2020.

Since the end of 2019, at the request of the SIMMT, an in order to allow for the maintenance of the training fleet vehicles and to relieve the regiments’ manpower, Arquus has taken over new services, more operational and less regenerative. These activities, which have covered 112 VABs in 2020, are set to grow, with a target of 230 vehicles supported in 2021.

Arquus also aims to offload manpower and optimize the vehicles’ uptime by repairing the components of VABs. In 2020, the Limoges plant took over the renovation of 200 undercarriages, an activity that will continue in 2021, with the possibility of increasing volumes. These renovations are in addition to 600 other more conventional repairs, including engines, gearboxes, and transmissions for VABs. That industrial performance highlights the plants’ adaptability and ability to handle many programs simultaneously.

Arquus can regenerate vehicles à la carte and according to the customer’s wishes, from light repairs (brakes, oil changes, filters, belts…) to the most in-depth (parts replacement, renovations, or improvements). These capabilities ensure the long-term support of equipment in service, including older vehicles.

These new activities allow a finer adaptation to the needs of the forces, from 200 hours for light renovations to 800 hours for a complete regeneration.

Since 2014, Garchizy is also in charge of the deep curative maintenance (Maintenance Curative Profonde, MCP) of the CBH385, carried out in close collaboration with the Operational Energy Service (Service de l’Energie Opérationnelle, formerly Service des Essences des Armées, SEA). Initially planned for 40 vehicles, the series has been extended to 50 trucks, the last of which was presented in the last quarter of 2020. These MCP operations have restored great potential to vehicles of crucial importance in external operations, to the satisfaction of the forces.

Lastly, 10 TRM10000CLDs were renovated at the Garchizy plant in 2020, out of a target of 12 vehicles set during the year. This activity, carried out in partnership with the 12th BSMAT in Neuvy-Pailloux, is currently being transferred to Saint-Nazaire.

In Saint-Nazaire, 33 VLRAs were to be renovated in 2020, a target raised to 37 at the beginning of the year. Despite the COVID situation, the decision was made to confirm this target and even to take on additional VLRAs, with lighter repairs, for a total of 41 vehicles and trailers.

The repair teams encountered many additional technical problems and obsolescence, which led to some delays in meeting this new target. A total of 29 vehicles were handed over to the forces in 2020, with the remaining 12 being delivered in early 2021. This result is the result of a real teamwork between Arquus, the SIMMT and the SMITer branch in Marolles, with experience sharing, vehicle and parts stocks made available to ensure the fastest possible return of VLRAs to the units.

Saint-Nazaire is also in charge of the TRM2000 renovation program. The TRM2000 Private Industrial Repair program is the 7th truck support program supported by Arquus, after the six PIR programs included in the MSSPL (Heavy Truck In-Service Support Market) contract. It is the result of a close collaboration with the SIMMT, SMITer, Bureau Conduite des Contrats et Partenariats Industriels (BCCP) and 13 Base de Soutien du MATériel (BSMAT, Equipment Support Base).

This program aims at extending the operational life of TRM2000s, which entered service between 1982 and 1992, and which now have between 28 and 38 years of service in the most demanding theaters of operation. These tactical vehicles are highly appreciated by forces for their lightness, compactness and mobility. Functional and efficient, they are now intended for overseas units and operations.

For the year 2020, the objective was 67 renovated TRM2000. 57 were actually presented to the SIMMT, after a year of ramp-up on the technical control and support of the vehicle. To compensate for some obsolescence, a brand-new sampling activity has been set up, which will ensure the availability of parts for the armed forces and the Arquus support network.

Targets for 2020 also included the delivery of 6 TRM10000 APD heavy logistics trucks. One vehicle was delivered to Garchizy and the other five to Saint-Nazaire, in line with the commitments. The next TRM10000 repairs conducted by Arquus will all take place on the Saint-Nazaire plant.

The Arquus plant in Saint-Nazaire is also in the process of setting up a new line capable of handling 150 GBC180s per year. By 2022, this line should take over the renovation activities currently being carried out in Limoges.

With these new capacities, the Saint-Nazaire site is specializing and becoming Arquus’ new Center of Expertise for Operational Maintenance. As such, the site will be responsible for all the renovation activities carried out on the fleets and vehicles supported by the company, from VBLs to TRM10000s. At the same time, the production of new vehicles previously carried out in Saint-Nazaire will be transferred to Limoges, with the exception of the VT4 production line.

By ensuring the regeneration of equipment for the benefit of the forces and allowing the combatants to focus on the missions that are at the heart of their commitment and to project themselves into the operational future, Arquus is helping to achieve the Army’s strategic vision for 2030.

This partnership enables the preparation of the answers to the major challenges of tomorrow’s operational maintenance, particularly in terms of infrastructure sizing, logistics flows and support organization. Arquus can answer these challenges with its maintenance expertise and its efforts in obsolescence management. The company can increase the volume of activities that can be carried out for the Army in line with operational needs.

During this very special year, this industrial organization has proved its efficiency, responsiveness and resilience for the Army. These repair activities were carried out in perfect cooperation with SIMMT, SMITer and in a true relationship of trust.

Today, Private Industrial Repairs represent nearly 30% of Arquus’ total industrial workload. This activity has been growing steadily since 2014 and the first PIRs carried out successfully on GBC180s and CBH385s have proven the value of such programs.

The essence of PIRs is to provide armies with capabilities and potential through refurbishment rather than the purchase of new equipment, by pooling know-how, inventory and ideas. As a true partnership between SIMMT, EM SMITer, BSMATs and Arquus, these PIR operations are carried out hand in hand, with a close relationship, strong links and mutual enrichment, in the best interest of the forces.

On the TRM2000, for example, the ramp-up of skills was carried out in parallel at Arquus and the 13th BSMAT, with each entity renovating 15 vehicles over the year 2019. Private Industrial Repairs are at the heart of the military spirit, through its balance between rusticity, audacity, experimentation and the pooling of expertise.

These vehicles, from the GBC180 to the TRM10000, offer unique capabilities that are now vital and unreplaceable in the field, requiring a special effort from both the institution and the industry while awaiting their replacement by a future generation of equipement. These vehicles, which carry an essential part of the Army’s logistics and resources on a daily basis, will keep doing so in future operations once they have been refurbished, passing wherever the others stop.

Arquus has been a partner of the SIMMT since the signature of the Land Maintenance charter in November 2019. The aim of this charter is to strengthen the links between the armed forces and its industrial partners, to the benefit of the forces.