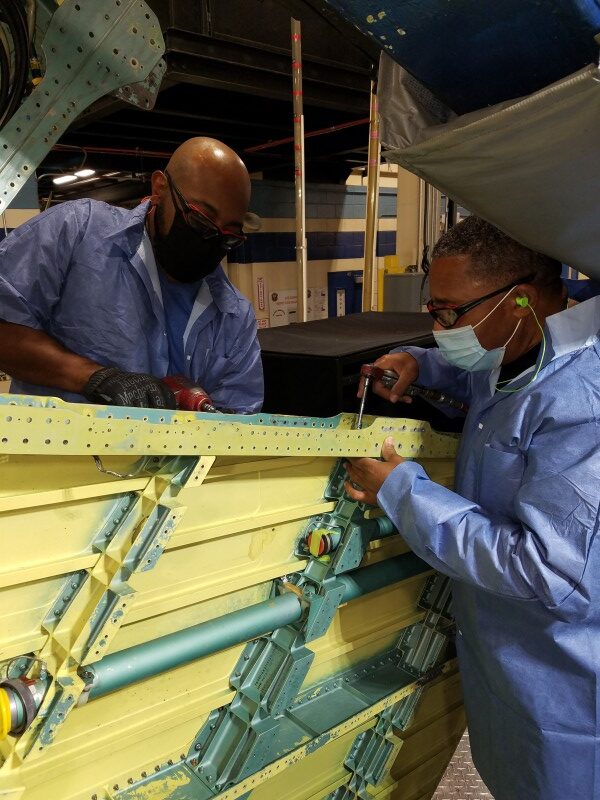 With hundreds of flight hours on the books, F-15E Strike Eagle aircraft at the Warner Robins Air Logistics Complex needed newer wings to keep the birds flying through 2040.

Production lead time for new wings from the original equipment manufacturer was about five years and five times the cost of a refurbished F-15SA wing.

Joe Hudson, F-15 Structures section chief in the 409th SCMS, who is a member of the F-15 Saudi Wings Team that was charged with procuring wings for the jets, said the deal saved the U.S. Air Force $80 million on eight sets of wings in Fiscal Year 2020, with a potential savings of $250 million with future buys.

“In June 2018, the 409th SCMS partnered with the F-15 System Program Office, the F-15 Foreign Military Saudi case manager, and Worldwide Redistribution Service representatives to determine the feasibility of purchasing Royal Saudi air force F-15SA wings that were removed during a fleet retrofit and scheduled for destruction,” he said.

After completing a business case analysis of several wing procurement initiatives, Hudson said the decision was made to buy the F-15SA wings.

Lt. Col. Matthew Pope, deputy security assistance program manager for AFLCMC’s F-15SA Conversion, Fighters and Advanced Aircraft, said during the conversion process, the F-15S wings are removed and would otherwise be scrapped or demilitarized, but his team worked out an alternative arrangement that benefitted all involved.

“My team was in a unique position to help facilitate the F-15 wings purchase initiative through arrangement for temporary storage after the wing removals at the conversion line in Saudi Arabia and to coordinate documentation approvals with the partner nation,” he said.

Pope’s office, along with the F-15SA Sustainment Team, coordinated with the RSAF director of Programs, to staff and obtain final signatures on the memorandum of understanding for purchase of the initial eight sets of wings, with the possibility to buy up to 42 more sets.

After obtaining the proper approvals, Pope said the F-15SA Conversion Team coordinated with an aerospace organization out of Saudi Arabia for packaging, inspection, and shipping of the initial eight sets of wings that were delivered to Robins in August 2020.

“Recognizing that the Royal Saudi air force F-15S to SA conversion includes removal and disposal of wings, the U.S. Air Force F-15 office determined that the potential of obtaining several sets of Royal Saudi Air Force wings in “A-Condition” from F-15SA conversion might offer a massive schedule and cost savings for the aging F-15 fleet,” he said.

With this in mind, the footwork for the deal kicked off in February 2019 leading to the huge success, Pope said.

“This wing buy gives the U.S. Air Force the option to install these wings at a significant time and cost savings, while U.S. Air Force legacy wings are waiting for parts or in the event they are found to be non-reparable,” he said.

Additionally, the deal sets the stage for the possibility of hundreds of millions in future savings across the Future Years Defense Program, Pope said.

From a strategic perspective, Pope said the effort provided the Saudi Arabian government millions in needed revenue during the COVID-related oil collapse, while ensuring that the U.S. Air Force maintains the F-15 force it needs, at a significant cost and schedule savings.

“Saudi Arabia is a key strategic partner, and creative, mutually-beneficial endeavors such as the wings buy serve to grow the partnership even stronger,” he said.

Eric Wietstruk, F-15 Product Support manager in the AFLCMC’s F-15 Program Office at Robins, said the F-15SA wings provide a viable and cost-effective option for replacing some of the F-15E wings that are beyond economical repair.

“The purchase of the F-15SA wings will open up opportunities to procure other aircraft parts resulting from the F-15 Saudi Aircraft Conversion Program that will benefit the warfighter at a reduced cost,” he said.

As the F-15 product support manager, Wietstruk is responsible for ensuring the F-15 fleet can be maintained and sustained for years to come.

Securing the F-15SA wings is another key example of how the United States and its foreign military sales country partners have mutually benefited from a long-term strategic alliance, Wietstruk said.

“We continue to work with our FMS partners to support and sustain our mutual F-15 legacy and new aircraft fleets, he said.

Hudson said the team successfully synchronized four agencies to complete a “first of its kind” acquisition of F-15SA wings from the Royal Saudi Air Force.

“Our Integrated Product Team successfully completed acquisition agreements between U.S. Air Force and FMS partners, developed innovative solutions to overcome storage and shipment impacts during the global pandemic, and met our customers’ requirements ahead of need dates,” he said.

The F-15SA wings are scheduled to be installed on aircraft during programmed depot maintenance in 2021.