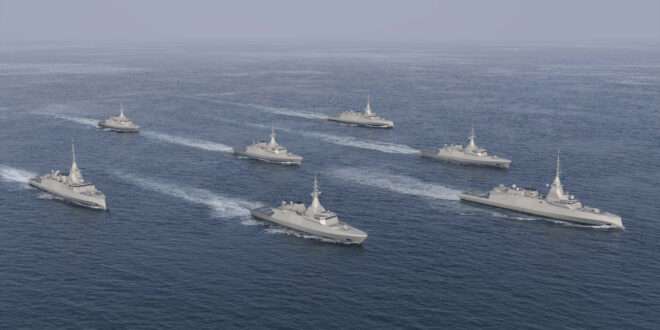 As the frigate program moves forward, Naval Group fulfilled its commitments to involve the Hellenic industry and strenghthened its ties with our Hellenic partners.

As the Hellenic Industry Participation plan for the FDI frigates is going ahead, Naval Group is prepared to reinforced these partnerships even further to bring more business and jobs in Greece for the Gowind corvettes program.

David Quancard, Naval Group Executive Vice-President Operations and Performance added: “At Naval Group, we are convinced that partnership is a key and strategic driver for the success of the complex programs that we conduct. We are proud to have Hellenic partners on-board our FDI programs. We are looking forward to working with them also on the Gowind corvettes and many other Naval Group ships. “

To date, 23 contracts have already been signed with Hellenic partners for the FDI frigates with 10 Greek companies. The last contracts were signed at the Hellenic Pavilion during Euronaval in October and work has already begun:

• SALAMIS
Naval Group and Salamis Shipyards have signed a contract for the construction in Greece of several hull blocks for the FDI frigates. This contract may cover blocks for up to 6 frigates, for the French and Hellenic navies. These blocks, weighting from 25 to 100 t will be built in Salamais Island and shipped to Lorient for final assembly. The kick-off meeting was held on November 15th 2022 and the production engineering and shipyard preparation is ongoing, for a start of steel works expected in early 2023.

“After being selected this October by Naval Group for building several pre-outfitted blocks for French and Greek FDI frigates, we have started the preparation of our workshops and machines. The discussions with Naval Group teams are conducted in a very positive spririt, on both sides, and we are eager to start the production in Q1 2023” said George Koros, CEO of SALAMIS SHIPYARDS & ENGINEERING.

• AKMON
On November 18th 2022, at the Hellenic Pavilion of Euronaval, AKMON SA and Naval Group have signed a contract for the production in Greece of several sets of consoles and electronic cabinets for the FDI frigates Combat Management System, the Integrated Bridge and Navigation System and the Integrated Platform Management System. The kick-off meeting was held on November 16th 2022.

After an intial period of traning and transfer of know-how for the AKMON team, at the Naval Group site of Angoulême-Ruelle, the production work will start in 2023 in Greece, in Ano Liosia Industrial Park .

AKMON is proud to start this consoles and cabinets production activity in Greece in our premises of Ano Liosia Industrial Park for the FDI frigates. Thanks to the strong support of NAVAL GROUP, we are confident that this first step will pave the way for many other opportunities for FDI and other naval programmes”, outlines Tassos Rozolis, AKMON CEO.

• MEVACO
Since the signature of a Framewok Agreement and a contract at Eurosatory in June 2022, the cooperation between Naval Group and MEVACO SA has been growing with the teams working together and the signature of contracts.

After a phase of qualification of the welders by Bureau Veritas, the production has started in Aspropirgos in September 2022. The first Factory Acceptance Test has been successfully conducted on November 23rd 2022 for the very first equipment “made in Greece” for the FDI frigates. This equipment, a major structural hull device requiring a high level of mechanical precision (and the very first of a long series) will now be shipped to Lorient to be mounted on the second Hellenic frigate.

George Organopoulos, Head of MEVACO Defense Department explained “MEVACO is currently producing several mechanical equipment for the FDI frigates, and we are proud to deliver this month our first equipment, in time and with the level of quality required. The relationship with Naval Group teams is excellent and very constructive in every domain.”

• EMMIS
EMMIS, a renowned company specialised in electric transformers, is actively participating to the FDI frigates program, for both French and Hellenic navies. EMMIS has joinded Naval Group supply chain in June 2022 and was contracted the same month for the supply of electrical equipment for the FDI frigates. The production of the first set has already started in EMMIS factory of Kifisia, for a first delivery in Lorient expected mid-June 2023.

Andreas Miserlis, CEO of EMMIS explained “We are very proud of being one of the very first Greek companies selected by Naval Group for the FDI frigates and our production is inline with the schedule. We are confident that this first cooperation with Naval Group will lead to many other project opportunities, on all types of naval vessels”.

MAREL, and its sister company SPACEL both located in Piraeus, are currently involved in the FDI frigates program to supply several navigation and communication equipment (radar system

components, echosounder, heading repeater, VDR, SATCOM, GMDSS, etc.). After a stringent pre- qualification process conducted by Naval Group. Once the equipment is delivered in Lorient,MAREL specialists will participate to their mounting onboard as well as to the test and trials phase.

“With the strong support of Naval Group, we are very proud of involving MAREL in the FDI program and thus actively contributing to Naval Group Hellenic Industry Participation plan. Our collaboration is running smoothly, and we are now expecting the first deliveries in Lorient in the coming weeks” highlights Pierre Jousse, THEMYS President & CEO

Beyond their participation to the frigates program, all qualified Greek companies will integrate the Naval Group’s supply chain and have the possibility to participate to other future international competitions, thus increasing their capabilities as well as their potential economic benefit and visibilityontheworldwidenavalmarket. Thankstoitslong-termpresenceinGreece,NavalGroup has been able to identify and build relationships with many high-skilled and innovative companies. As at today, more than 80 projects have been identified and the Group has started to engage with over 50 prequalified Hellenic companies.

Naval Group’s Hellenic Industrial Participation plan will thus contribute to the construction of the FDI HN but also to the creation of a robust naval industrial ecosystem in Greece. The structured and long-term partnership proposed by Naval Group will foster production in Greece but also the capability to address future needs.