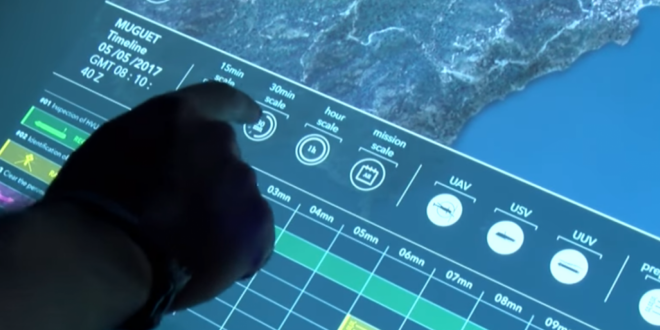 Naval Group confirms the robustness of its drone management solution

In September 2021, Naval Group successfully conducted operational demonstrations of its drones’ mission management solution integrated with the combat management system. The demonstrations took place at the Troia naval base in Portugal as part of the European collaborative project COMPASS 2020 (Coordination of Maritime Assets for Persistent And Systematic Surveillance) which aims at strengthening the European Union’s maritime surveillance capabilities.

The COMPASS2020 project aims to enhance the security of the European Union’s external borders and maritime surveillance capabilities by improving the situational awareness of coastguards and maritime authorities beyond coastal waters through optimal and continuous aerial and underwater coverage in reduced time and under various weather conditions.

In partnership with AMN (Autoridade Maritima Nacional de Portugal) – coordinator of the project – Tekever, ECA Group, Edisoft and TNO among others, Naval Group carried out a large-scale atsea demonstration using an underwater drone (UUV) and two aerial drones (UAV). The three drones were deployed from a Portuguese Navy Offshore Patrol Vessel, the NRP Setubal, off the coast of Troia, in Portugal, and from a land base. The scenarios involved assisting a migrant boat and foiling drug trafficking.

The real-time planning, management and operation of the drones and payloads, as well as the communication between the Offshore Patrol Vessel and the shore-based centre for the coordination of the operation, were all carried out from Naval Group’s drones’ mission management solution. During this demonstration, a suspicious vessel was detected, identified and neutralised in less than 30 minutes.

Diane Mulard, technical manager of the project for Naval Group, said: “We are very proud to see our solution working in a real environment. Despite the health context, we found solutions for remote de-risking and were able to cope with the difficulties during the face-to-face trials. We are proud to offer a scalable solution that can be adapted to different capabilities and types of missions and provides a real operational advantage for the navies.”

Vanessa Cauvin, Director of R&D Collaborative Development Europe, added: “This program is the result of an intense European collaboration to which Naval Group is proud to participate. Thanks to the Naval Group solution, the mission management of drones is facilitated within joint and combined coalitions to gain efficiency and increase interoperability between ships and drones. We hope that COMPASS2020 will pave the way for other European collaborative projects in this field with the quality partners we have collaborated with in the consortium.”

In order to constantly bring new capabilities to its customers, Naval Group integrates innovation at the heart of its strategy and throughout the life cycle of its solutions to maintain their operational superiority. In this sense, the Group has been working for several years on the development and integration of autonomous vehicles and offers innovative and efficient drone systems as well as the integration of all types of drones on board ships through standardised solutions.

Naval Group’s drones’ mission management solution is the product of several years of R&D and innovation and the result of the Group’s recognised expertise in systems development, particularly for naval drone integration. This solution enables the supervision of naval drones’ operations in all environments: air, surface and underwater. Integrated into the combat management system of surface ships or submarines, this system can also be deployed on a command centre on land.