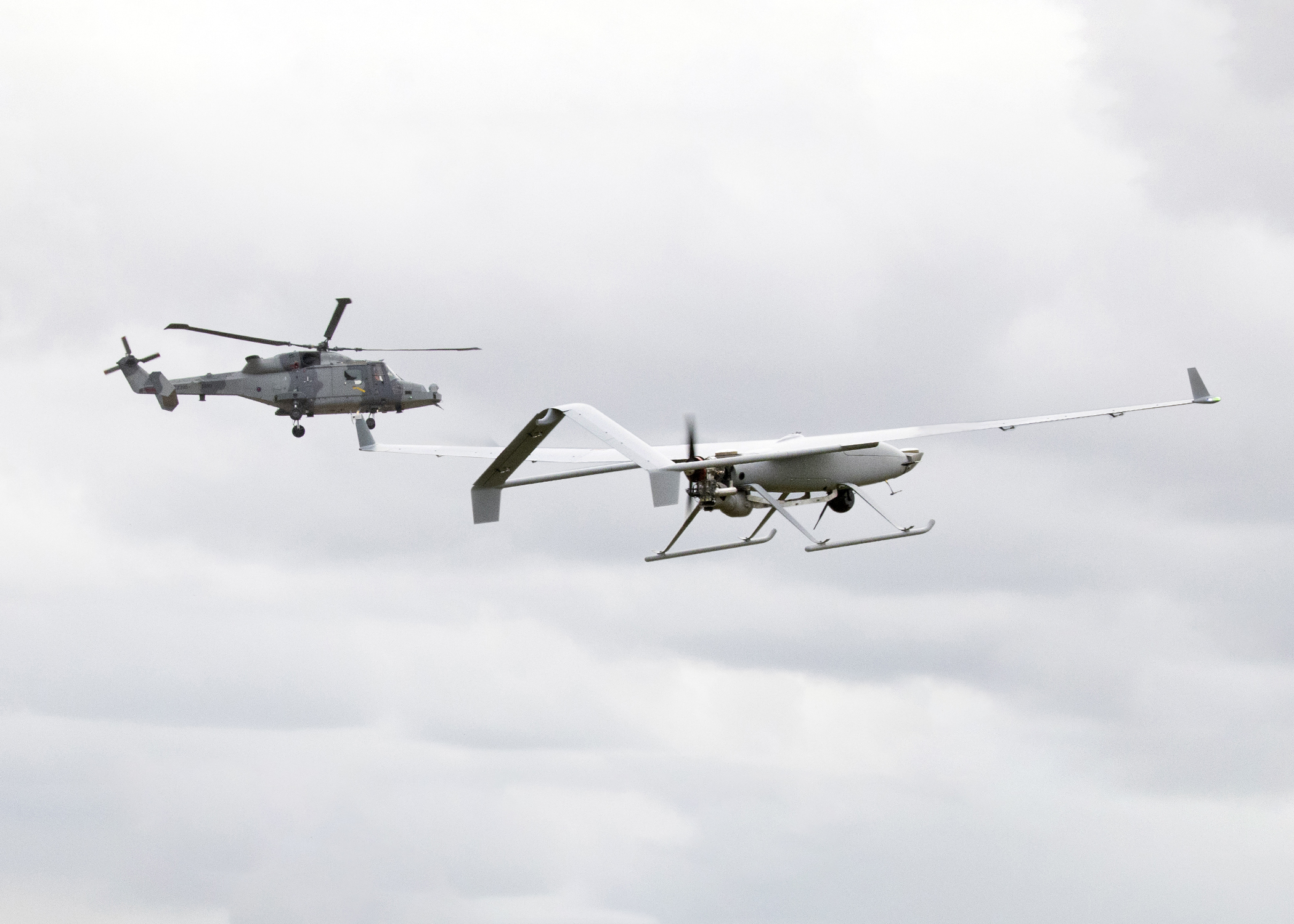 Leonardo successfully demonstrated unique integrated capabilities between a manned aircraft and an unmanned aerial vehicle (UAV). This took place in the UK during Manned-Unmanned Teaming (MUMT) trials between a Leonardo AW159 Wildcat helicopter and a semi-autonomous UAV from Callen-Lenz Associates.

In this instance, MUMT is when a helicopter crew controls a UAV from the helicopter like it was an onboard sensor being controlled from the cockpit. By integrating control of the UAV into the Wildcat Mission System, Leonardo was able to minimise the pilots’ workload allowing them to focus more on the mission whilst simultaneously controlling the UAV – this is the first time such an integrated capability has been demonstrated in the UK on a military aircraft. A ‘Gateway Processor’ supplied by Callen-Lenz Associates was used to interface with its semi-autonomous UAV.

The Leonardo solution allows the Wildcat crew to control both the flight path and payload of the UAV (a capability known as Level of Interoperability (LOI) 4) using an efficient and effective task based Human Machine Interface (HMI), rather than the more operator intensive approaches employed on other systems.

Combining the strengths of manned and unmanned platforms, MUMT has the potential to play a transformative role by increasing the situational awareness, tempo, lethality, survivability and combat mass of aviation forces, significantly reducing crew workload allowing pilots to focus on the mission at hand.

Teaming of manned aircraft with unmanned air systems (Manned Unmanned Teaming MUMT) enhances air support capability in both the Land and Maritime environments. It also enables extended and complex operations to be conducted with a mix of platforms and systems.

The demonstration was part of the British Army’s MUMT themed Army Warfighting Experiment (AWE) 19, and was planned and executed by Dstl and took place on Salisbury Plain in September.

These trials build on simulation based development conducted under the Dstl funded AMS DE-RISC programme. This successful demonstration is now expected to inform the MUMT capability roadmap for both the UK MoD and Leonardo.

Nick Whitney, Managing Director of Leonardo Helicopters (UK), said: “The success of this manned-unmanned trial highlights that Leonardo and the UK MoD are investing together in the future of UK rotorcraft engineering and it demonstrates further the value of a long-term partnering approach in terms of capability development.”

Bryan Finlay, Technical Partner at Defence Science and Technology Laboratory (Dstl), stated: “Leonardo and Callen-Lenz have delivered a fantastic demonstration of the integration of a UAV control station into the mission management system of the Wildcat helicopter. The clever design of the human machine interface means that cockpit workload is well managed and the demonstration has successfully de-risked that technology. This is a key step towards realising an effective operational MUMT capability.”

Maj Benjamin Thomas, Military Adviser Platform Systems Division at Dstl, commented: “The development of the Wildcat integrated MUMT solution has been impressive, culminating in the successful demonstration of the capability on AWE 19 in a series of representative military vignettes. MUMT has undoubtedly the potential to be a game-changing capability for aviation operating in the Land environment, increasing both situational awareness and survivability.”

The continued development and integration of cutting-edge solutions across all domains of remotely-piloted and autonomous/semi-autonomous systems and technologies, including MUM-T, is a key element of Leonardo’s BeTomorrow2030 Strategic Plan. Leonardo continues to be at the forefront of rotorcraft development in the UK through its Yeovil facility and the Company is investing in the next-generation of technology and innovation. The site is the UK’s only end-to-end helicopter manufacturer, designing and building rotorcraft for national and export markets. With a longstanding experience in aviation over the last 100+ years at the facility, Leonardo continues to take great pride in supplying its high-tech aircraft and capabilities to the British Armed Forces.