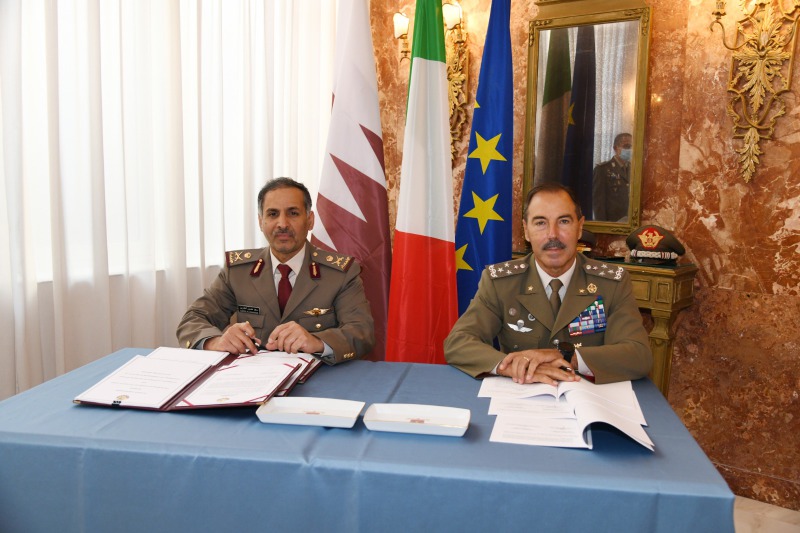 The agreement signed by the Italian Army Chief of Staff, General Farina (R), and the Commander of the Qatar Land Forces Maj. Gen. Al-Khayairi, initially focuses on joint training and exercises, but will probably lead to the equipment sales as well. (Italian Army photo)

The official visit to Italy of a delegation led by the Commander of the Qatar Land Forces, Major General Saeed Hesayen Mohammed Al-Khayarin ends today. The Commander also visited several offices and departments of the Italian Army and yesterday morning signed an important cooperation agreement with the Army Chief of Staff, General Salvatore Farina.

General Al-Khayarin, who arrived in Rome on Sunday afternoon, was a guest at the Anti-Aircraft Artillery Command of Sabaudia (LT), where he was welcomed by Brigadier General Fabrizio Argiolas. After attending an information briefing on the capabilities of the Counter Mini / Micro Remotely Piloted Aircraft Center of Excellence (CM / M APR), the delegation visited a static display of the main weapon systems used in the anti-aircraft specialty, also attending an operational demonstration of counter-drone capabilities.

On Tuesday morning, the Qatari delegation went to Salento, at the “Torre Veneri” firing range, where the Cavalry School and the “Pinerolo” mechanized Brigade are currently engaged in testing weapons systems and new technological platforms in use by the units of the Italian Army.

Brigadier General Claudio Dei, Commander of the Cavalry School, held a briefing at the 2nd level Tactical Training Center (CAT), illustrating the main innovations that characterize the new Centauro 2 heavy armoured car. The visit continued inside the shooting range, where the guests attended a fire exercise with the Blindo Centauro, with the execution of various operational tests aimed at testing both the technical and mobility capabilities of the hull, and the potential of the turret, through firing of the main armament (120mm cannon) and of the secondary weapons: the MG42 / 59 coaxial machine gun (7.62mm) and Hitrole system, with 7.62mm, 12.7mm and 40mm weapons.

In the afternoon, the delegation was hosted by the Commander of the “Pinerolo” Brigade, Brigadier General Giovanni Gagliano who presented the digitized Command Post, which is part of Project 4.9 of Forza NEC (Network Enabled Capability); the tactical Command Post on VTMM ORSO (Medium Multirole Tactical Vehicle); the VTLM 2 NEC (Light Multirole Tactical Vehicle); the VBM Freccia (Medium Armored Vehicle) as well as the kit that constitutes the “Safe Soldier” system.

Thanks to the use of the communication systems of the digitized command posts deployed in “Torre Veneri”, General Al-Khayarin was able to appreciate the conduct of tactical maneuvers carried out by the Brigade’s units in a completely digital environment. The demonstration allowed him to appreciate the advantages deriving from the execution of the Command and Control function (C2) in a digital environment.

Yesterday morning, the delegation was received by the Chief of Staff of the Army, General Salvatore Farina with whom, after presenting of military honors in the Army Building’s square, a bilateral meeting was held in which the briefing on “The Italian Army towards 2030: Organizational and modernization strategies” was presented.

This agreement, originating during the Italy-Qatar Army Staff Talks in Doha on 7-8 May 2019, provides for the possibility of conducting a series of training and training activities in the Qatari territory aimed at developing combat capabilities of infantry, artillery and cavalry in favor of the Qatari Emiri Land Forces.

In particular, the TA establishes general rules on the training of military personnel in the legal, financial, logistic, administrative and security sectors. Furthermore, it establishes some essential minimum requirements (in terms of technical and linguistic knowledge) for attending courses.

Afterwards, the two senior officers moved to the Military Hippodrome “Gen. C.A. Pietro Giannattasio “, in the Tor di Quinto district, where, following the signing of the Honor Roll and a symbolic exchange of gifts, they attended the historic carousel of the Mounted Squadrons of the Lancers of Montebello (8th) Regiment.

General Al-Khayarin’s visit to Italy ended today in the military complex at Cecchignola, where he met the Brigadier Generals Luigi Postiglione, Commander of the Engineers Brigade, and Stefano Francesconi, Commander of the Transmissions. The visit involved, in particular, the Counter IED Center of Excellence and the newly established Army Cyber Security Department.

The signature of the TA and all the visit activities to the Bodies and Departments of the Armed Force by the foreign delegation were carried out in full compliance with the rules established by the Government for the fight and prevention of the spread of the SARS CoVid-19 virus.

Previous ThalesRaytheonSystems and Leonardo: A Memorandum of Understanding to Strengthen Cooperation on NATO’s Air Command and Control System (ACCS)
Next Rockwell Collins gets $103M contract for UH-60M avionics