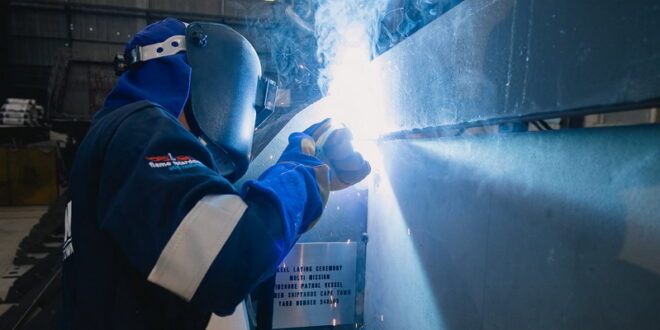 The tradition involves placing a newly minted coin on the keel and building over it. The coin laid at the DSCT event was a commemorative medal made in honour of the late President Nelson Mandela’s 1993 Nobel Peace Prize win. The coin was placed on the keel by the Chief of the SA Navy, Vice Admiral Mosiwa Hlongwane). The keel bar was then lowered on top of the coin and welded into the structure – a privilege that went to Lucian Norman, a second-year apprentice at Damen’s training school which has since its inception in 2010, educated more than 200 young people previously from disadvantaged communities.

Speaking at the event, CEO of Armscor, Advocate Solomzi Mbada, stated that “the acquisition strategy for this project included Commercial-Off–The-Shelf (COTS) equipment, as well as compliance with the DTI (Department of Trade and Industry) 60% local content shipbuilding designation requirement, Defence Industrial Participation (DIP) and National Industrial Participation (NIP). This ensured that Armscor could maximise local participation and ensure that the vessels can be supported locally, thereby minimising the life cycle support costs. The strategy further acted as an impetus for the shipyard to improve its local infrastructure and investment in human resources, creating jobs that are much needed to boost the South African economy and help reduce the high unemployment rate.”

“I would like to thank the DSCT team for ensuring that the requirements as articulated by the South African Navy have been brought to light. Amidst the challenges of COVID 19, you have risen to the occasion,” Hlongwane said.

DSCT’s managing director, Jankees Trimpe Burger, said, “The project undertaking serves as a demonstration of Damen Maritime Security Solutions in action. With this initiative, Damen not only delivers a ship, but also a total maritime solution, encompassing every aspect of vessel operation throughout the lifecycle as well as a contribution to a sustainable maritime industry in the region in which it operates”.

Damen said it has met NIP, DIP, youth employment, local content and other requirements in the Biro build and has created over 300 direct jobs and over 1 000 indirect jobs in line with the South African Government’s Operation Phakisa objectives.

The three new MMIPVs will sail as Warrior Class vessels in recognition of warriors who led their people with great bravery to fight many battles in South Africa.

SAS Sekhukhune (P1571) will be the first MMIPV in service come next year. The first hull was put into the water at Cape Town’s V&A Waterfront in March this year before being moved to the Elliot Basin for further fitting and finishing work. The other two MMIPVs are SAS Adam Kok (P1572) and SAS Shaka (P1573). The keel for the second vessel was laid in August 2020.

The vessels DSCT is supplying are to its Stan Patrol 6211 design. They have a length of 62 metres, a maximum speed of 26.5 knots, a range of 4 000 nautical miles, and a crew of up to 62. The vessels will each carry one 7 metre long RHIB and one 9 metre long RHIB for boarding operations.

Damen said the vessels for Project Biro are tailored to the specific requirements of the South African Navy and feature the Damen Sea Axe Bow – a vertical hull form that reduces slamming for safe, comfortable operations in rough seas. The multi-mission inshore patrol vessels are the first Sea Axe vessels to operate in South Africa.