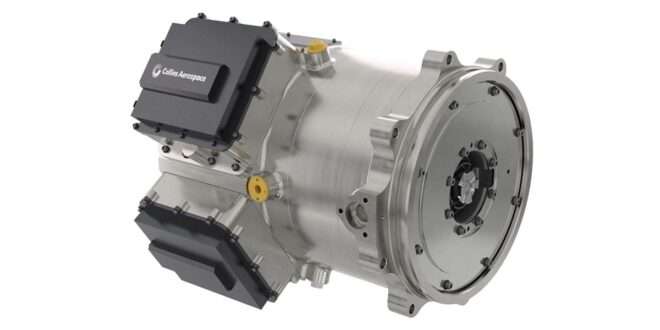 Collins Aerospace has completed Preliminary Design Review of the 1 megawatt electric motor and motor controller it’s developing for Pratt & Whitney Canada’s (P&WC) regional hybrid-electric flight demonstrator. Collins has tested both systems to full current, voltage and speed, and plans to send prototypes to P&WC for ground testing later this year. Flight testing of the demonstrator is planned to begin in 2024 and will take place in Montreal.

Collins’ motor features industry-leading power density and efficiency. The company is developing the systems at its facility in Solihull, United Kingdom, and testing them at the University of Nottingham’s Institute for Aerospace Technology. Collins plans to conduct future testing of the motor and motor controller at The Grid, the state-of-the-art 25,000-square-foot electric power systems lab it’s standing up at its facility in Rockford, Illinois. The Grid is expected to be fully operational in 2023.

“Through this close collaboration between Collins and our sister Raytheon Technologies business Pratt & Whitney, we are developing sustainable hybrid-electric propulsion technologies that will play an integral role in helping the aviation industry reduce carbon emissions to net-zero by 2050,” said Henry Brooks, president, Power & Controls for Collins Aerospace. “Together, we have the opportunity to truly redefine aerospace with greener solutions that will benefit not only our industry, but our world as a whole.”

P&WC is working together with Collins, De Havilland Aircraft of Canada Limited, battery systems supplier H55 S.A. and other collaborators on the flight demonstrator. The program is targeting a 30% improvement in fuel efficiency and commensurate reduction in CO2 emissions, compared to today’s most advanced turboprop engines for regional aircraft. As part of the program, a De Havilland Dash 8-100 experimental aircraft will be re-engined on one side with a 2 megawatt-class propulsion system that combines a fuel-burning engine from P&WC with Collins’ 1 megawatt electric motor in a parallel hybrid configuration with a 50/50 power split. The electric motor will provide extra power during take-off and climb, allowing the fuel-burning engine to be optimized for cruise efficiency. The new technology will also be designed to run on 100% Sustainable Aviation Fuel (SAF).

“Our hybrid-electric flight demonstrator program is leveraging and attracting expertise from leading aerospace and research organizations in Canada and around the world,” said Jean Thomassin, executive director of new products and services, P&WC. “By optimizing the performance of the propulsion system for greater efficiency, hybrid-electric technology provides a key pathway to setting new standards for sustainability in aviation, across a range of different applications.”

Hybrid-electric propulsion technology is a core element of both Collins’ and Pratt & Whitney’s strategies for enabling sustainable aviation. In addition to the demonstrator program for the regional turboprop segment, the companies are also working together on scalable hybrid-electric propulsion solutions for novel advanced air mobility vehicles and single-aisle passenger aircraft.