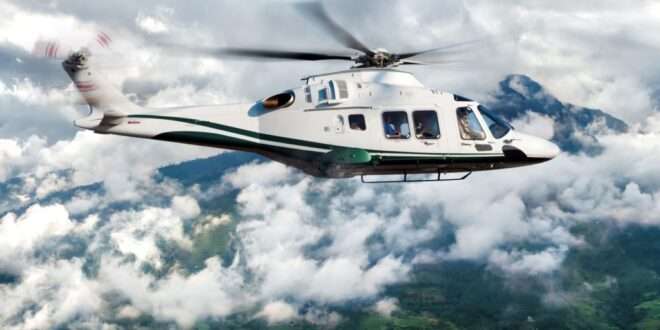 Leonardo: AW169 lands contract in the VIP/corporate market in Mexico

Leonardo announced that the AW169 new generation light intermediate twin engine helicopter is set to enter the Mexican VIP/Corporate market, further expanding the success of the type among operators across Latin America and the globe and strengthening the role of Leonardo in the world’s multiengine VIP helicopter segment which already accounts for an approximately 40% share.

A Mexican private operator will introduce into service an AW169 this year, featuring a highly customized configuration combining the highest standards of quality and comfort and leveraging the outstanding cabin space of the model. Popular types like the AW109 light twin series and the AW139 intermediate twin have also proven extremely successful in Latin America and Mexico for various applications, including VIP/Corporate transport, over the years and the AW169 is now one more option to meet evolving regional market requirements. For more than three decades, Leonardo has been the preferred OEM of Mexican customers for VIP/executive transport operations with several AW109 variants sold and in service. The AW169 offers existing light twin operators in Mexico higher payload, more space and greater comfort. At the same time, as the lighter brother of the world class AW139, the AW169 benefits from the AW Family commonalities delivering similar capabilities on a smaller and lighter scale with distinguished equipment and systems. The AW109 GrandNew and Trekker models will continue to offer best-in-class capabilities for operators looking for light twins with high performance and customization levels.

The AW169 incorporates several new technology features in the rotor system, engines, avionics, transmission and electric power generation and distribution systems. The AW169 can comfortably accommodate up to ten passengers in its large, unobstructed cabin, fitted with a range of customized equipment and entertainment systems. The aircraft is powered by a pair of Pratt & Whitney PW210A turboshafts which also have an auxiliary power unit (APU) mode, ensuring the continued operation of the environmental control system and radios, among others, when the rotors are stopped. The AW169’s avionic suite introduces state-of-the-art technology including a fully digital NVG compatible cockpit with three large area displays and touch screen technology with enhanced 3D graphics capability for maximum situational awareness. The AW169 is also the first helicopter in its category entering the market with an electric retractable landing gear which reduces complexity and maintenance requirements. This solution adds to fixed landing gear and skid landing gear as options. A performance increase package is under development to provide even greater capabilities to customers in all conditions, including Hot&High, for which the AW169 will have the best in class power-to-weight ratio making the AW169 the perfect fit for operations in Mexico.

Certified in 2015, nearly 240 AW169s have been ordered by customers worldwide to date to carry out a range of mission including VIP/corporate transport, EMS/SAR, law enforcement, firefighting, electronic news gathering, utility, training and military missions.

Previous The U.S. is Sanctioning itself by Sanctioning Turkey
Next Combat Aircraft One Step Closer to Getting Outfitted