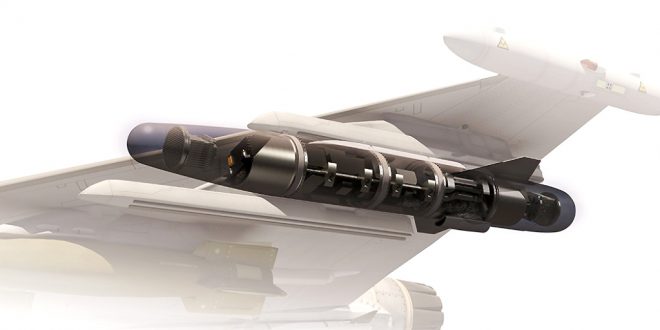 Sensor solutions provider HENSOLDT has achieved a far-reaching technological leap in the advancement of technologies to control the electromagnetic spectrum. Combining artificial intelligence, digitisation, Active Electronically Scanning Array (AESA) and 3D printing technologies, HENSOLDT has developed a multi-function jamming system (‘jammer’) called ‘Kalaetron Attack’ that can actively jam enemy radars in an extremely wide frequency band, but can also be used passively as a reconnaissance sensor. ‘Kalaetron Attack’ is on display at this year’s AOC Europe exhibition in Liverpool/UK.

“The latest air defence and combat aircraft radars cover an extremely wide frequency bandwidth or jump between certain frequencies in a fraction of a second, making them extremely difficult to neutralise,” says Celia Pelaz, chief strategy officer and head of the Spectrum Dominance division at HENSOLDT. “By combining the latest technologies, we have managed to optimise the emitted power in a targeted way while controlling the electromagnetic spectrum with one receive channel. This would make ‘Kalaetron Attack’ perfectly suited both as an aircraft self-protection system and in the role of an escort jammer.”

Core elements of the system are a fully-digitised, broadband sensor and effector, a fully-polarisable, electronically controllable jammer and a condensed design of the electronic components only made possible by metallic 3D printing. This has made it possible to integrate the AESA jammer into a relatively small pod system that can be easily integrated into flying platforms but also scaled for sea and land applications. The next step in development is to fit it into an aircraft in order to confirm the already outstanding laboratory results in realistic flight tests.

‘Kalaetron Attack’ is part of HENSOLDT’s all-digital ‘Kalaetron’ product family. It can be deployed in various configurations on diverse platforms for self-protection, ESM and signal intelligence tasks, depending on customer needs. HENSOLDT has been active in the spectrum dominance market for decades. The company has developed COMINT and ELINT sensors for NATO and partner forces and integrates them into EW systems for the Air Force, Army and Navy.