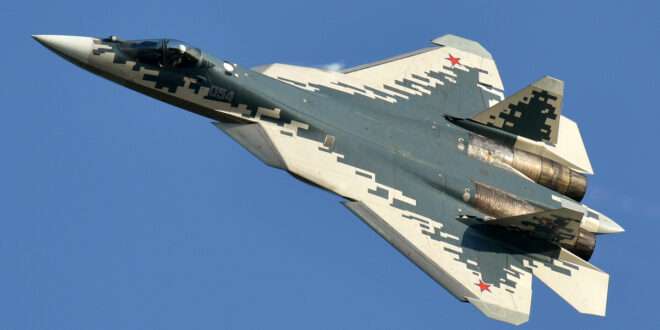 The Su-57 features the maximum automation of piloting and combat employment processes, which has helped specialists develop a one-seat multirole fighter, the publication says.

Automation, information integration and intellectual support are the key requirements for the ergonomics of the cockpit of a modern fighter, Head of the Cockpit Department of the Sukhoi Design Bureau (within the UAC) Nikita Dorofeyev told the New Horizons magazine.

“Theoretically, the pilot may not engage in piloting after the take-off and until making an approach for landing and can instead focus on searching for and attacking targets. Moreover, this process is also sufficiently automated,” he stressed.

According to the magazine’s data, the fighter is equipped with multifunctional indicators that can provide the pilot with a large amount of information on the tactical situation and the operation of the aircraft’s systems.

The Su-57 incorporates the technology of intellectual support that helps the pilot accomplish assigned tasks, the New Horizons magazine says.

The Su-57 is a Russian-made fifth-generation multirole fighter designed to destroy all types of air, ground and naval targets. The Su-57 fighter jet features stealth technology with the broad use of composite materials, is capable of developing supersonic cruising speed and is furnished with the most advanced onboard radio-electronic equipment, including a powerful onboard computer (the so-called electronic second pilot), the radar system spread across its body and some other innovations, in particular, armament placed inside its fuselage.

The Su-57 took to the skies for the first time on January 29, 2010. Compared to its predecessors, the Su-57 combines the functions of an attack plane and a fighter jet while the use of composite materials and innovation technologies and the fighter’s aerodynamic configuration ensure the low level of radar and infrared signature.

The plane’s armament will include, in particular, hypersonic missiles. The fifth-generation fighter jet has been successfully tested in combat conditions in Syria.

The Russian Armed Forces received the first Su-57 fighter in 2020.