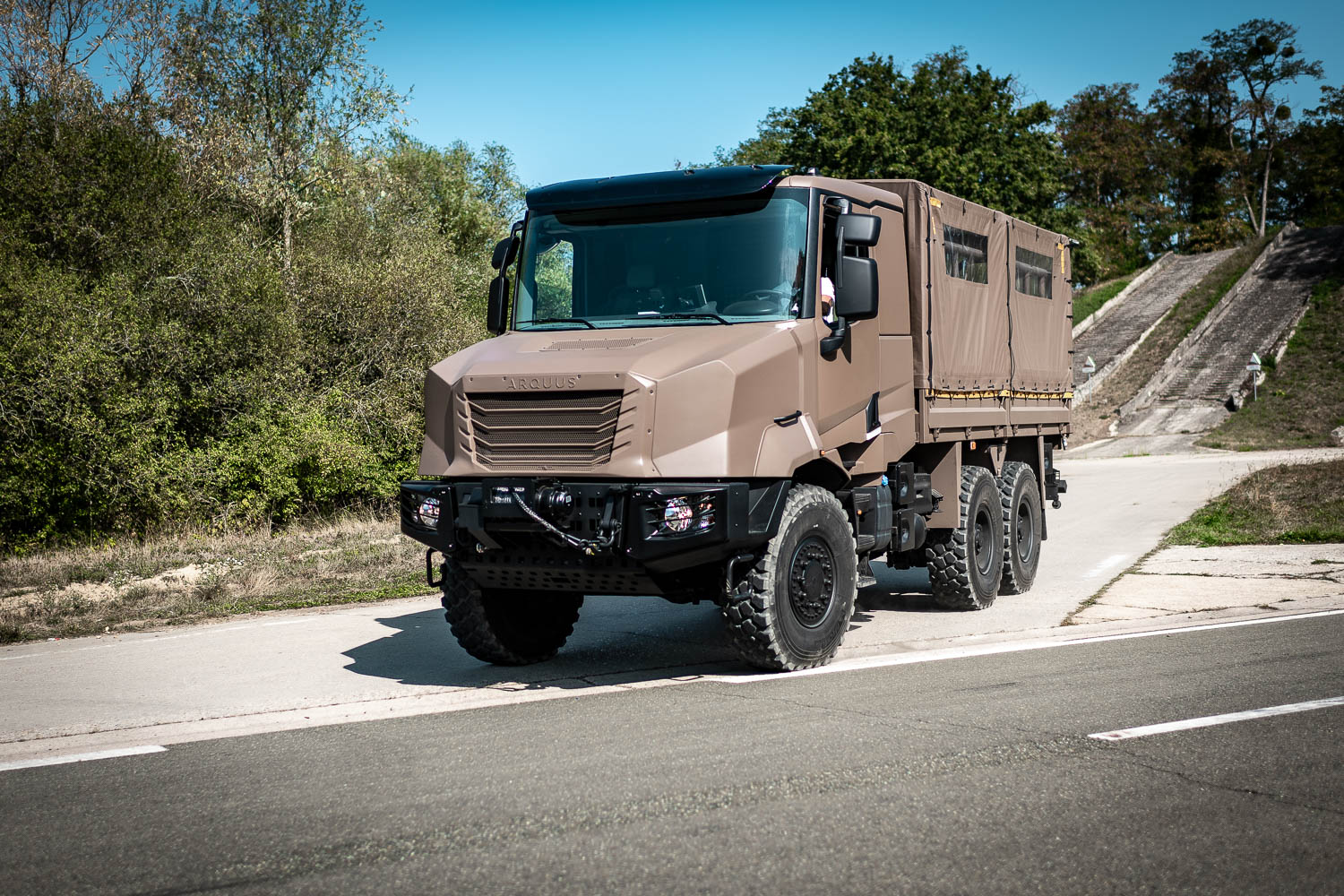 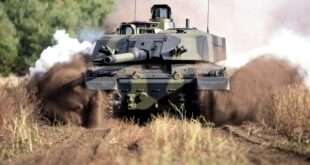 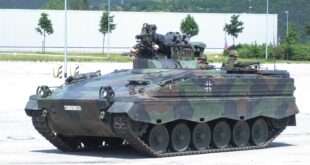 To keep in touch, to present the work done over the past few months and demonstrate the capabilities of its latest vehicles, Arquus organized a full demonstration day dedicated to its products and services on September 17, 2020 on the Satory test tracks: the Arquus Day. The Arquus Day was an opportunity to give a concrete presentation of the vehicles and developments unveiled during the Arquus e-xpo, a virtual exhibition put online during the summer of 2020, and in particular the flagship of its brand new logistics and tactical range: the ARMIS 6×6.

Presented for the very first time, the ARMIS 6×6 is the worthy heir of the ARQUUS logistics and tactical carriers that serve daily within the armies, from the VLRA to the GBC180. Built on a specifically military base and incorporating time-tested civilian technologies, it offers very high performance levels, both in terms of payload and off-road mobility. Developed with ARQUUS’ expertise and the support of the Volvo Group, the ARMIS 6×6 benefits from the feedback of current generations of army carriers.

With its upgraded and hardened chassis, the ARMIS 6×6 is at ease off-roading and crossing even the most difficult terrain. It is equipped with an 11L engine with 460 horsepower (euro 5) which allows it to clear 50% ramps. Close to the Jaguar EBRC engine, this engine provides it with great agility and enables it to accompany the latest generation of combat vehicles on the battlefield. Its gearbox, equipped with the Ultra-Low Crawler option, enables it to stop safely on slopes. Brake assist also helps to save the main brakes on steep slopes. Presented in a dynamic demonstration on the Satory test track during Arquus Day, the ARMIS 6×6 proved its very high mobility and discretion.

Rustic and enduring, the ARMIS 6×6 is fully adapted to the operational constraints of the armed forces. Mobile and rugged, it is suitable for long deployments, complex missions and harsh environments with reduced maintenance requirements. Versatile, the ARMIS 6×6 is able to fulfill a wide range of logistical and tactical missions for the benefit of armies. Its multifunction platform is capable of transporting personnel in a secure and ergonomic way, cargo, systems or 10 or 15-foot shelters. Modular, it can support numerous versions and configurations, ensuring efficiency, ease of use and tactical freedom for the commander in the field.

The ARMIS 6×6 was presented at the Arquus Day in an unprotected version. It also has a version with a STANAG 4569-compliant ballistic, mine and IED-protected cabin. Its architecture with a remote cabin gives it the highest level of protection (both mines and IEDs as well as ballistic threats), a protection which can be upgraded depending on the mission at hand. The ARMIS 6×6 has a common cabin with the 8×8 (sheet metal or armored) to facilitate vehicle handling and maintenance.

The ARMIS 6×6 can be upgraded over time to adapt to the mission profile and the theater of operations, as well as to the evolution of threats encountered. The ARMIS 6×6 is air-transportable and rail-transportable.

The ARMIS 6×6 cabin can accommodate up to three 95th percentile seats. It is configured to Army standards, with weapon mounts or covers, accommodation for communication systems as well as for backpacks, water packs and other equipment. The cabin is equipped with screens to manage remote-controlled weapon systems (RCWS) and Battlefield Management Systems (BMS).

The ARMIS 6×6 incorporates selected innovations that are relevant to the battlefield, proven in all conditions, and deliver very significant energy and maintenance savings. In particular, it is equipped with ATC (Automatic Traction Control), a technology developed by the Volvo group that Arquus is able to offer for all its ranges. ATC automatically manages the engagement of the axles in order to optimize the mobility of the vehicle, allowing very high capacities at the best operating cost. The driver retains the decision, with the possibility of engaging the differential locks manually. This technology ensures better vehicle handling, fuel savings and reduced stress on axles and tires.

The ARMIS 6×6 also incorporates modern road safety technologies (ADAS, ABS/EBS, ESP), which lighten the pilot’s workload and allow him to focus on his mission. These innovations also ensure easier maintenance and savings in ownership and usage costs for user armies.

The ARMIS 6×6 is designed to evolve over time, according to the needs and demands of armies, both technically and technologically. In particular, it is predisposed for all the latest ARQUUS innovations in terms of remote operation, automation and energy optimization. With the support of the Volvo Group, and relying in particular on the experience of the PEA VAB Electer, ARQUUS is currently working on the development of eco-responsible versions for all its ranges, thus offering new tactical capabilities in the field.

The Maintenance in Operational Conditions (MOC) of the ARMIS 6×6 has been taken into account from the design of the vehicle, with very demanding specifications such as maintenance times on usual maintenance operations. These specifications also set a high degree of commonality between the Group’s vehicles, which facilitates the constitution and management of operational stocks and the training of maintenance personnel. The ARMIS 6×6 can also be equipped with HUMS (Health and Usage Monitoring Systems) in order to allow predictive maintenance operations and to simplify fleet management. This use of HUMS takes advantage of the EVTA Vérité, a tactical evaluation recently conducted successfully with the SIMMT (Integrated Structure in charge of the Maintenance in Operational Conditions of the Army equipment) on an Army VAB (Véhicule de l’Avant Blindé) fleet.

The maintenance of the ARMIS range benefits from the Arquus network, which covers the whole of France, including overseas, and places each Army regiment less than 15 minutes from a point of service. This unique network demonstrates its capabilities on a daily basis by supporting more than 10,000 trucks for the armed forces. This same network now contractually ensures a 95% uptime on the Army’s fleet of VT4 multi-purpose light vehicles. This network is already sized to handle the ARMIS fleets, both in France and abroad. Pioneer of the maintenance in operational conditions for the Army fleets, ARQUUS has set dedicated teams, already engaged alongside the armies.

To coordinate these activities, Arquus has recently set up a logistics platform in Garchizy, in the Nièvre region. This modern site, which also houses the spare parts and components platform for the Griffon and Jaguar vehicles of the Scorpion program, is also the unique center for spare parts and components for Arquus vehicles in service with the French Army. In order to facilitate the coordination of activities with the armies, Arquus has set up dedicated secure servers to interface the maintenance management systems and simplify the expression and processing of requirements. These arrangements ensure the fastest access to spare parts and components needed by maintainers, and the highest Operational Tactical Availability for the commander in the field.

Composed of three specifically military 4×4, 6×6 and 8×8 vehicles, the ARMIS range is a family designed, developed and produced in France, specifically tailored to the needs of the French armed forces. It brings together around Arquus the know-how of many companies, including numerous SMEs, in the French automotive industry. Anchored in the national territory, the ARMIS range is thus able to irrigate the entire French industrial fabric, from Bourg-en-Bresse to Limoges and from Blainville to Marolles-en-Hurepoix. 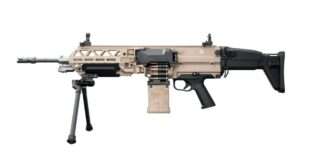